SCS Profile in Excellence: The entrepreneurial Class of 1993 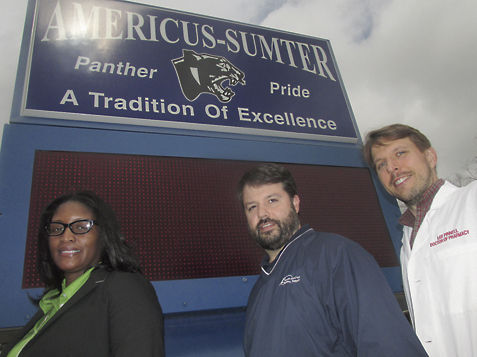 AMERICUS — An entrepreneur has nobody to complain to. If something does not go right on the job, if things don’t work out the way they were supposed to, there are no grievance forms to fill out; no supervisor with whom to air their complaints. They just have to fix the problem.

In a world of corporations and franchises, it is increasingly rare to find a person willing to create a name that has never been used before and put it out into the open market for all the world to see. But Americus-Sumter High School Class of 1993 produced three such innovators.

Eshonda Blue settled on the name “Innovative Senior Solutions.” The company provides nurses to assist senior citizens who want to still live at home but need some help to do so. She and her sister, Jessica Wright, were inspired to create the company when faced with the decision about putting their own grandmother in a nursing home. Prior to that point, the two of them had been working with nursing homes.

“My grandmother told us she never wanted to go to a nursing home,” said Blue. “Working in the nursing home business, we saw so many seniors who didn’t really need to be there. They just needed someone to help them get out of bed, get dressed and get them going. We saw a need and we developed a company to address it.”

Innovative Senior Solutions has 104 employees, 65 of which are full-time. It is one of three thriving businesses to come out of the Class of 1993 along with Clinic Drugstore and Accelerated Physical Therapy.

Lee Pinnell bought from his father a majority share in the business that he had grown up in. Although the stresses of owning his own store may be greater than collecting a paycheck at someone else’s, the rewards to him are far greater.

“The buck stops with me,” he said. “If I see something is wrong, I have the ability to change it. It is very self-gratifying. You can see the results of what you are doing in helping patients and creating good jobs for the community.”

Clinic Drugs employs 34 people, 15 of which are full-time.

Alex Saratsiotis and his business partner Tracy Law worked together at Sumter Regional Hospital as physical therapists before deciding to break away and create their own business.

“I have always had the notion I wanted to work for myself,” Saratsiotis said. “I like the autonomy and felt like I could get things done.”

He points out that as an entrepreneur, your circle of responsibility grows exponentially.

“It’s not just our families we have to worry about, but our employees depend on the decisions we make every day to provide for their families,” he said.

Interestingly, all three business owners had family members who modeled the entrepreneurial spirit. Alex is the son of George Saratsiotis who owns George’s Menswear downtown, a thriving clothing store and tailor shop in Americus for more than 40 years. His story is the story of the American dream.

“Dad came to the states from a small town in Greece with a trade and very little grasp of the English language,” Alex said. “He showed that through passion, determination and hard work, you could pretty much make it. I am sure that inspired me.”

“Alex, Eshonda and I were all real close growing up,” said Pinnell. “The common characteristic between the three of us was that our parents were all leaders. Everyone came from a good house with good parents.”

Blue came from generations of entrepreneurs. Her father owns a construction business and his grandfather owned a mechanics shop in New Jersey. Her mother Evelyn Wright was a teacher and girls’ basketball coach at Americus-Sumter County High School, but her mother’s father owned a farm in Lee County.

“They all worked hard, seven days a week, 24 hours a day,” she said, adding a comment about the joy that being an entrepreneur provides her.

“I get to put into practice the things I can come up with,” she said. “I enjoy being able to be me. Because I love what I do, it doesn’t feel like work.”

But along with these joys come unique responsibilities:

“You have nothing to fall back on,” said Saratsiotis. “You enjoy your successes, but you also have to own up to your failures.”

All three credit the education they received through the local public school system as preparing them for the challenges they faced in college and after that. In particular, the AP classes and the classes offered through Georgia Southwestern gave them a step up on the other students:

“I feel like my teachers really cared about me,” said Blue. “I feel like I had a great education, had great teachers; our classrooms were controlled and it was a good environment.”

“I felt like I had really good study habits from high school,” said Saratsiotis. “When I went to college it made studying easier for me.”

Eshonda Blue: “Hire people who are smarter than you and who bring something different to the table. Find something that you are passionate about. If it’s something you love, it doesn’t feel like work. You’ve also got to have leadership skills, which means sometimes you are not the most popular person.”

Lee Pinnell: “Try to mimic positive attributes of successful people. Try to look at whoever is doing something with their lives and is making a difference. Learn from the mistakes of others, as well. When you see people make bad decisions, try to understand what they did wrong.”

Alex Saratsiotis: “Find something you are interested in and work your tail off and it all works out well for you. You have to have drive and determination or you will get caught in the 9-5 grind.”