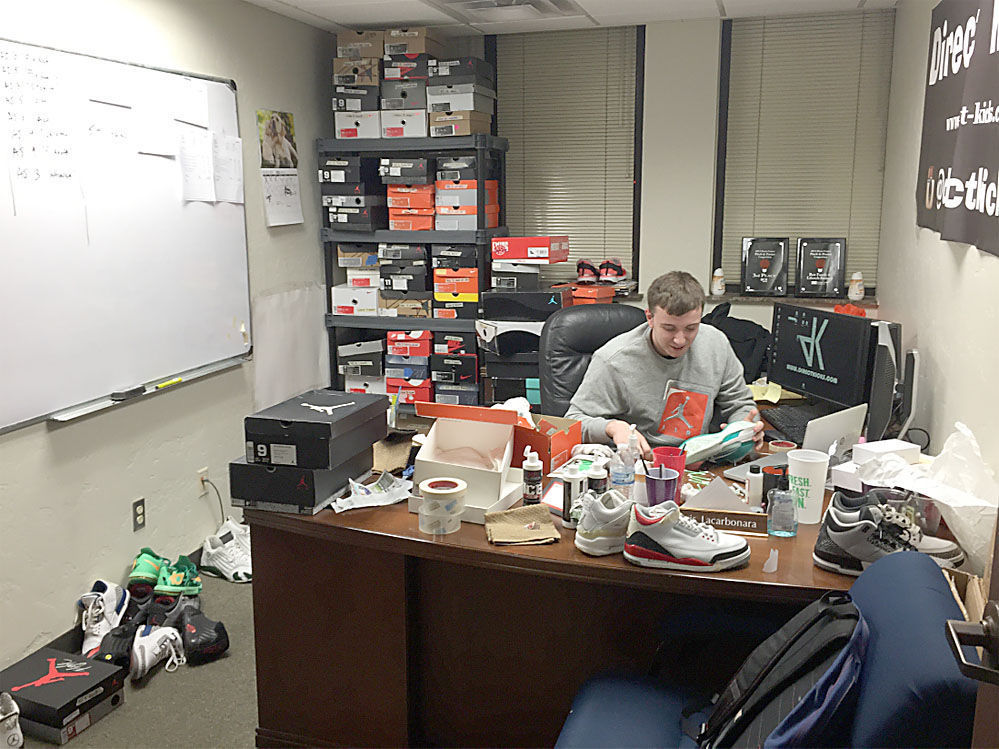 Louis Lacarbonara, 21, is a passionate New Yorker who started “flipping” athletic shoes in 2013, during his junior year at Oklahoma State University. The Italian owns one of two companies in the university’s Riatta Center for Entrepreneurship that is actually making profit, selling up to 60 pairs of sneakers a week.

However, Lacarbonara’s rise to becoming a self-made man began as many do, with mom.

In his hometown of White Plains, New York, during the summer of 2013, Lacarbonara’s mother insisted he find a job during school to pay for his gas. He was finally going to bring his car back to Stillwater, Oklahoma for the first time.

Surfing the web, bored, and getting close to making that 1,450-mile drive, Lacarbonara stumbled on a YouTube video about reselling shoes. The people in the video were taking older models of athletic shoes and cleaning them or repainting them to resell.

Lacarbonara continued watching a few more videos then decided he had found his solution to the job problem. In early August, after finding a company that sold random used shoes in bulk, he made a blind investment of $1,000.

“The shoes came in. I had no experience selling shoes, but started selling them and realized I could make real money doing this,” Lacarbonara said. “So I kept ordering the boxes.”

In November, Lacarbonara came up with the name Direct Kicks and made an Instagram account for his business. He also started buying shoes straight from consumers and stopped buying boxes from companies.

Lacarbonara maintained a steady selling rate of around 10 pairs per week, making a profit of about $2,000 a month.

He focused on collections and well-known shoes that in turn helped him build a reputable Instagram and name. Currently 90 percent of his sales come from online customers.

Working out of the office OSU gave him, Lacarbonara spends anywhere from 30 minutes to 2 hours preparing one pair of shoes to be resold, depending on what needs to be done to them. In a little over a year he saw a profit increase of $10,000 and now sells up to 60 pairs a week.

60 pairs a week means the hours begin to add up. He works 10-15 hours a day and even admits to skipping class a few times to keep working.

“He won’t come back to the house until 1 or 2 o’clock in the morning sometimes,” roommate Colin Kopepassah said. “He lives at his office.”

This article first appeared in the Stillwater (Ok.) News Press