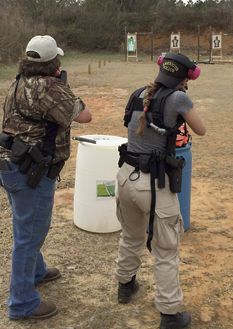 AMERICUS — In a called meeting Feb. 26, the Americus Mayor and City Council met with Police Chief Brian Carney to discuss the needs of the police department. Carney had come before the Council on Feb. 12 to ask for a raise for his employees and new vehicles and equipment. The chief, who has only been on duty here since Jan. 1, had prepared an information packet outlining exactly what his department needs. At that meeting, he told Council he was nine officers short; that number had grown to 11 by the meeting on Feb. 27. Carney did not get to lay out his complete packet of information but was told that a called meeting would be held at a later time.

At the Feb. 26 meeting, Mayor Barry Blount asked Carney to identify the two greatest needs. Carney said it is the low salary for starting officers, which is $12.87 an hour. He said that’s why he is losing people and why no one wants to come and work here. He has only two applications, he said.

Carney said the Americus Police Department (APD) received 2,500 more calls for service than the city closest to Americus in population, according to a report by the state Department of Community Affairs (DCA).

“That impacts workload,” he said. “If we had a traffic unit, we’d be getting DUIs and increasing safety here. … If we had a crime suppression unit to address entering autos and burglaries, we could provide stakeouts for burglars and robbers. We can’t do that because we don’t have the bodies. There are things that we don’t have that we need. Personnel and salary are tied together. We’re behind the eight ball … and are unable to do modern-day crime-solving techniques.”

“That’s what you have to decide,” Carney said. “(Police officers) have to support their family and that’s the issue. It’s your decision where the funds will come from. It’s a bad problem and I don’t see an easy solution.”

“And you also need vehicles?” queried the mayor.

“If I get funds, I can get six vehicles by going the used route,” Carney said. “But I’ll still need to equip them.” The department is already budgeted to receive three vehicles this fall.

Interim CAO Billy Beckett suggested using reserve funds in the General Fund to purchase the vehicles. He pointed out $294,752 over the City’s $2 million General Fund reserve.

“It can be used as a capital expense for vehicles,” said Beckett, who added that there are other revenues such as from SPLOST and other sources that may have been underestimated.

“Even at that,” he said, “it’s a gamble. I can’t say you have stability; I’m new to the community, but it probably will add revenues. I have never run a deficit budget in my career.”

Beckett said he had studied the City’s five-year history and found that the estimates for revenues are low.

The mayor brought up the $63,000 franchise check the City had received from Georgia Power.

“But the EPA has just notified us that we have an inert landfill” that will require expenses, he said.

Council member Lou Chase added, “and there are software issues in the finance department we have to address.” She also said they can’t predict what the legislature might vote on in the way of unfunded mandates.

Council member Carla Cook said, “There are some things we need to collect.”

Beckett asked if she means the 150 cut-offs for utilities.

“That’s a different fund,” he said.

Chase asked Blount about his thoughts. He said he agrees with Beckett.

“But the struggle is how to address this without busting the budget,” Blount said. “It would take $159,000 for a 10 percent pay raise and that’s not just a one-time thing, but every year thereafter. How do we come up with it?”

The police chief said if he had a traffic unit, fines would double the general fund revenues.

“That depends on the judge,” said Chase.

“When the GSP (Georgia State Patrol) writes a ticket in the city, the revenues go to the City,” Carney explained.

Carney said he is asking for a 10 percent raise for all public safety employees (police and fire).

“How can we give public safety a raise without giving everybody a raise?” asked Chase.

“It’s so obvious,” Beckett said. “It (low pay) results in depression … This city will only be as good as the employees working here. Your greatest asset are (firefighters and police officers) and those working in this building. You have to have high standards and expect high performance. You’ve got to take care of your employees. You all have a problem with your employees right now: how they’re treated and morale issues.”

Council member Reese commented, “The police department is high profile and is a very stressful position.”

“It’s tough I know, but we’ve got to deal with it now. You can’t kick the can down the road,” Beckett said.

“It’s got to be fixed,” he said. “Five or six years ago it was the same way; it’s getting worse.”

Beckett added, “What if you get to 13 or 15 short? What is the public going to say about crime here?”

Beckett also said the fire department is down two and one is injured. Two more firefighters will be leaving in the next two months, making that department five short.

Beckett said he is “overwhelmed” by some of the things he’s seen in Americus and that the leadership will have to consider reducing services, merging (what he called a “dirty word”) or raising revenues.

“Sometimes it falls back on the taxpayers,” he said, “who expect value.”

Carla Cook asked about a study on the salaries.

“We cut it out of the budget because we knew what it would say, that the employees are underpaid and we didn’t have the money,” Chase said.

“What would be the cost?” asked Cook.

Council member Walton Grant said he’s against paying $10,000 to tell them something they already know.

Council member Juanita Wilson said, “We’ve got to do something; we can no longer exist as we are now. Talk to us about the excess of $294,000 and how we can utilize it.”

“You can use it on vehicles and equipment, not salaries,” Beckett answered. “You take an extraordinary move to take the risk to invest in public safety.”

He added that $334,000 is what is generated in fines and forfeitures in Americus.

“That’s pitiful for a city this size. I’m not saying it should be a police state or a speed trap, but invest in equipment. You get back funds in fines and forfeitures. Law-abiding citizens will be in favor of this.”

Blount returned to the matter of the reserve.

“We can’t be sure about unfunded or underfunded mandates such as our employee retirement fund,” he said.

“This is unassigned reserve, available for expenditure,” Beckett replied.

Chase said they need to looked at figures “for getting a city manager of high caliber to run the City.”

The discussion returned to police vehicles. Maj. Herman Lamar was asked about the cost, and he said the bare minimum is $29,000 per vehicle equipped with radio and light bar only.

Blount asked the police chief is he could get three vehicles now, instead of the nine he asked for, and three more in the fall.

Chase asked Beckett for a “ballpark figure” to give every City employee a raise. Beckett said he couldn’t but would look into it. Blount commented that City employees have not had a raise since 2012.

“You have to start somewhere,” Beckett said.

“I’m just very scared about what we don’t know and might come around, dipping into this reserve,” Chase said.

Reese suggested they allow Beckett and Dee Jones, City HR director, to look into a raise.

“We’re talking about a three percent across the board salary increase,” the mayor said.

“I get irritated with us buying whatever someone wants and then finding it’s not compatible with everything else,” Chase said.

“The issues we have to deal with are pretty substantial,” Beckett said. “I’m people-oriented and we’re talking about vehicles … We can get there in time …”

Carney wanted to go over the rest of his presentation but the mayor said “this is a start.”

Read Part 2 in next week’s print edition and online at americustimesrecorder.com