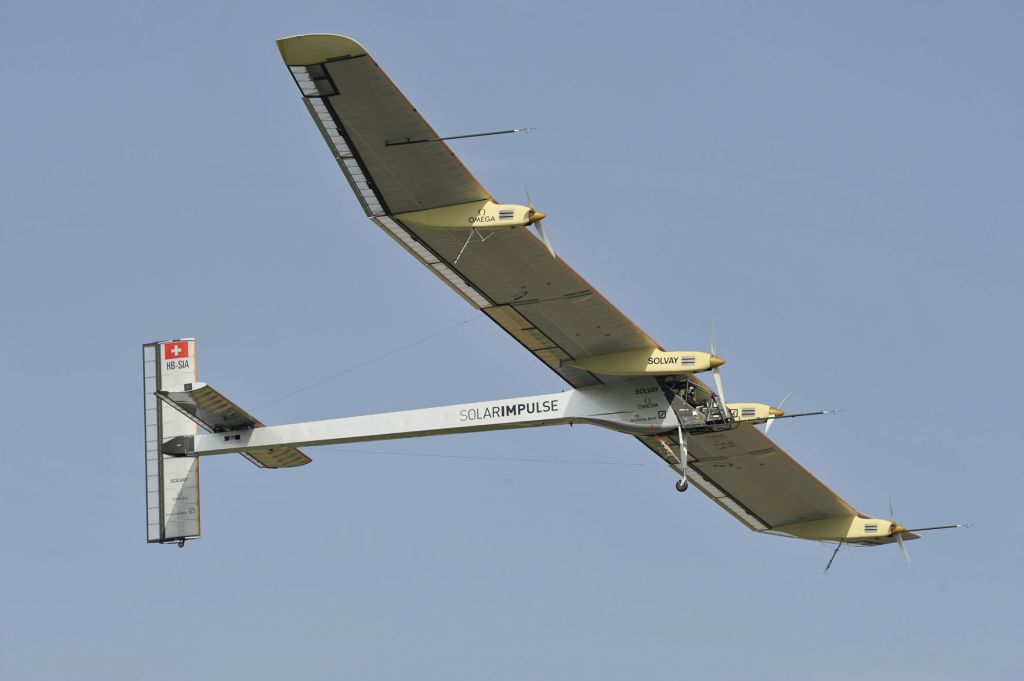 A historic attempt to fly around the world in a solar-powered aircraft the weight of a minivan began Monday as the plane took off from Abu Dhabi on the first leg of its journey.

The Swiss-made, single-seat plane left Abu Dhabi’s al Bateen Executive Airport just as the sun was rising. The plane, incredibly light but with a wing span longer than that of a 747 jet, runs only on solar power. Its wings carry just over 17,000 solar cells that transfer solar energy to four electrical motors that then power the plane’s propellers.

Electric bikes followed the plane, the Solar Impulse 2, as it taxied to take off, to prevent the wings from touching the runway, the BBC reported.

Solar Impulse founder Andre Borschberg flew the plane on the first leg of its 21,700-mile journey. He will trade off with fellow Swiss co-founder Bertrand Piccard during layovers.

“After 16 years of a dream, and 12 years of hard work, we hope it will work,” an excited Bertrand told the BBC after the plane took off.

Some legs of the 25-day, five-month journey will mean five full days and nights of flying solo, such as when it crosses both the Pacific and Atlantic oceans. It is due back in Abu Dhabi in late July or August.

The plane will stop at various locations around the world — for the pilots to rest and do maintenance — but also, more importantly, to spread the message about clean, renewable technologies.

The cockpit of the plane, about the size of a telephone booth, is so cramped that it holds only one person. The pilots will not be able to stand while flying, however, but the single seat reclines for stretching and its cushion can be removed to access a toilet.

“We never feel alone in the cockpit, though,” Bertrand told the BBC. He said millions of people around the world were behind the prototype effort to find a more sustainable and cleaner alternative to aircraft powered by fossil fuels. He pointed out that flight pioneer Charles Lindbergh also flew in a small cockpit.

The Solar Impulse 2 weighs just over 5,000 pounds, about as much as a minivan or a mid-size truck. An empty Boeing 747 jet weighs about 400,000 pounds.The solar cells line the top of the aircraft’s wings, and energy-dense lithium-ion batteries sustain it during nighttime flying.

On its first leg, the plane will head to Muscat, Oman, a journey that will take it about 10 hours. A typical passenger jet would take one hour to make that journey. The best speed for the solar-powered plane is about 28 mph, the pilots told the Associated Press. The slow speed means the journey’s legs will take several days and nights of nonstop flying.

Borschberg has been practicing yoga and Piccard self-hypnosis to get ready for the historic endeavor, the AP reported. They aim to rest a maximum of 20 minutes straight, repeating the naps 12 times over a 24-hour period — similar to how a lone round-the-world yachtsman sleeps in snatches.

Goggles worn over the pilot’s eyes will flash lights to wake him up, the AP said, and armbands placed underneath their flying suits will buzz if the plane isn’t flying level.

The plane will reach an altitude of about 28,000 feet during daytime hours to catch the sun’s rays. At night, when flying over oceans, it will fall to about 5,000 feet.

After two stops in India, the plane will head to China, where it will stay for a month until the days are longer to tap more of the sun’s energy. It also plans stops in Myanmar, Hawaii, Arizona and New York’s John F. Kennedy International Airport. The path across the Atlantic will depend on the weather and could include stops in southern Europe or Morocco.

Those interested can follow the aircraft on Solar Impulse’s website, tracking its battery status, energy consumption, location and flight path, as well as how much the pilot has slept and how much food and water he has left. There is also a live feed of the plane’s Monaco-based control room, with occasional footage from the cockpit.

“Now the adventure has started,” Piccard told the news agency at takeoff.