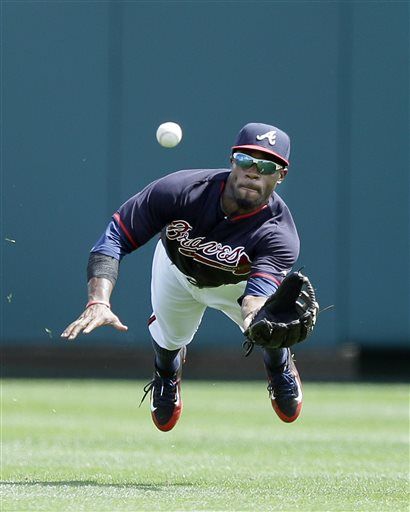 KISSIMMEE, Fla. (AP) — Left-hander Marco Gonzales strengthened his bid for a spot in the St. Louis rotation by allowing one hit over four scoreless innings in the Cardinals’ 6-2 victory over the Atlanta Braves on Wednesday.

Gonzales, who didn’t give up a run over two innings in his first spring start, struck out three and walked one. The only hit off the 23-year-old was a two-out double by first baseman Freddie Freeman in the first inning.

“That was outstanding,” Cardinals manager Mike Matheny said. “I think we saw all four of his pitches. “I was one of those days were he had everything working.”

Gonzales was supposed to work three innings, but went back out for another inning because of a low pitch count. Of his 51 pitches, 38 were strikes.

“I had another short inning and I was feeling good,” Gonzales said. “I was fortunate to keep the ball down, have some low counts and get some quick outs.”

A first-round draft choice in 2013, Gonzales came up to the Cardinals late last year and won twice in relief during the Division Series against the Los Angeles Dodgers. He was 4-2 with a 4.15 ERA in 10 regular-season games, including five starts.

If Gonzales fails to land a rotation spot, he could still make the team as a reliever.

“I’m just trying to prove myself and hopefully land a spot on the roster,” Gonzales said. “I’m not looking at it as a role right now.”

Gonzales originally relied on his fastball and changeup. Now he also has a curve and cutter.

“Long term I see him as a starter,” Matheny said. “I don’t think we’ve made any question about that. … He’s got the composure and the stuff to be a guy who can start in this league for a while.”

Braves: Alex Wood allowed two unearned runs in the third inning before leaving with two outs. The left-hander gave up three hits, walked two and struck out one. “I would have liked to finish the third inning,” said Wood, who reached his pitch limit with an out to go. “I felt good, but I thought my timing was a little off.”

Cardinals: Right-hander Lance Lynn, recovering from a left hip flexor strain, will miss his scheduled start Friday against Miami. He departed after one inning against the Marlins on Sunday after giving up an unearned run and two walks. Adam Wainwright (abdominal strain) threw a bullpen session Tuesday in Jupiter and will toss a second round of live batting practice before making his spring debut.

Braves: Third baseman Chris Johnson returned to the lineup after missing four games with a sore left wrist, but was 0 for 3 with a strikeout and committed a pair of errors that led to four unearned runs. Shortstop Andrelton Simmons (oblique strain) is tentatively set to make his spring debut on Thursday against the New York Yankees.

Cardinals: Right fielder Jason Heyward elected to play in Tuesday’s game against the Astros rather than face his old team in the second of back-to-back games in Kissimmee. The Braves and Cardinals will play in Jupiter on March 21. Heyward, who becomes a free agent after this season, had spent his whole career with the Braves before being dealt in a four-player deal that sent starting pitcher Shelby Miller to Atlanta. Heyward is 4 for 9 with a stolen base and two RBIs in four spring games.

Braves: Veteran reliever Peter Moylan, coming off a second Tommy John surgery, signed a two-year minor league contract that will have him serve as a player-coach in the rookie Appalachian League this year before getting an invitation to spring training in 2016. He last pitched with the Los Angeles Dodgers in 2013 after spending parts of seven seasons with the Braves.

Cardinals: Jamie Garcia, limited to seven games last season as he continued to battle injuries, will start against Baltimore on Thursday as the Cardinals return to Jupiter after two games in the Orlando area. The left-hander worked 1 1-3 innings in his spring debut Saturday, giving up a run while allowing three hits and a walk against Washington.

Braves: The Braves will face the Yankees’ Masahiro Tanaka in his Grapefruit League debut when they play their first night game of the spring in Tampa. It will be the second outing for Miller, who didn’t make it out of the opening inning in a rough first outing with his new team. He allowed three hits and walked two Saturday against Detroit.