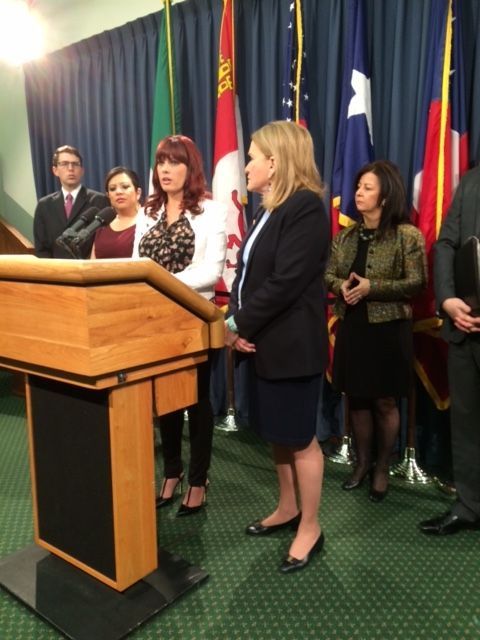 AUSTIN – Posting nude pictures of your ex on the Internet without permission isn’t a crime in Texas.

Hollie Toups, 35, of Nederland, described during a Capitol press conference on Wednesday how, in 2012, she learned that nude photos she had given an ex a decade earlier had popped up on a revenge-porn website.

“I didn’t know what was happening, but I was sure it was illegal,” said Toups. “Police said it’s immoral but it’s not illegal.”

In a separate case, a woman won a $500,000 verdict from a Houston jury last year for the emotional distress inflicted by an old college flame who surreptitiously recorded, then later posted, footage from romantic Skype calls.

Rep. Mary Gonzalez, D-Clint, is among a group of three state representatives and three senators who want to  criminalize such invasions of privacy.

Gonzalez’s proposal, for example, focuses too narrowly on those who’ve posted photos of spouses or others with whom they’ve shared a romantic or intimate relationship, Goldberg said.

“This excludes an enormous swath of victims whose computers were hacked or who were the victim of somebody else who they trusted with this intimate material,” she said, adding that the proposal also applies only to electronic distribution, leaving out images spread through other means.

She also criticized the measure because it specifies that someone must intend to harm a victim to be charged.

“The intent of the offender ought to be irrelevant given the extreme suffering experienced by victims,” she said. ” … Too many offenders engage in this conduct for fun, for profit, to brag, for entertainment, or for no reason at all.”

Victims should have the ability to file  anonymous complaints and seal their court cases, lest they receive publicity, she added.

“The media frequently finds these cases salacious and may really amplify the humiliation and exposure suffered by the victim,” she said.

But Mark Bennett, a Houston criminal defense attorney, cautioned lawmakers during an afternoon hearing that Internet posts are protected by the First Amendment.

“I’m not here to say this is not a harm,” he said. “The bills create statutes that are unconstitutional under the First Amendment.”

Danielle Keats Citron, a law professor and author of “Hate Crimes in Cyberspace,” urged lawmakers to consider the lifespan of photos posted online.

“Harassing letters are eventually thrown away, and memories fade in time,” she wrote. “The web, however, can make it impossible to forget about malicious posts.”

And it can make victims unwanted celebrities, said Toups, who described being approached by strangers who say, “Hey, I know you. I’ve seen you naked on that site.”

Toups said she didn’t have to change her name, unlike some friends of hers who’ve been targeted.

She also refused to pay the website’s operators $500 to remove the nude images of her.

She instead hired an investigator. That’s when a map appeared on the site pointing to her home.

“I set out to basically expose them,” she said.