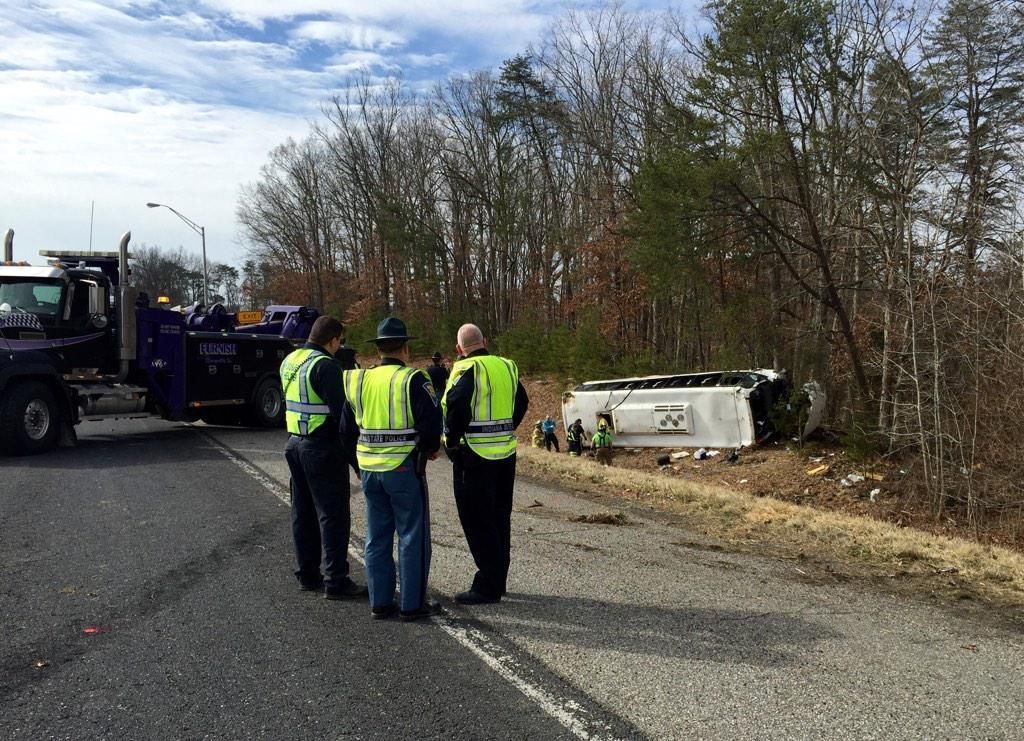 CLARK COUNTY, Ind.— One person is in serious condition after a bus carrying a college bowling team traveling from Fort Wayne overturned along Interstate 65 near Henryville, Ind., this morning.

Indiana State Police Cpl. Carey Huls said from the scene that the investigation of the accident was still in its early phases.

Huls reported 21 people were on the bus, including Indiana Tech players, the team’s coach, his wife and the bus driver. Everyone was transported for hospitalization as a precautionary measure.

Huls said the bus swerved to the left while traveling in Interstate 65’s southbound lanes before swerving to the right and overturning.

“We don’t know the cause but the bus did drive off the left side of the roadway and crossed back over both lanes before going off the right side of the road. It went over the embankment and overturned, and then it rolled into some trees.”

Indiana Tech spokesman Brian Englehart said all of the bowling team members are undergraduate students and the school was notifying their parents about the crash.

The bus, operated by Excursions Trailways of Ottawa, Ohio, was traveling for a competition in Tennessee, Huls said, when the southbound bus left the roadway near a rest area between Underwood and Henryville at mile marker 22.

Both air and ground ambulances responded to the wreckage.

University of Louisville Hospital spokesman David McArthur said 11 or 12 passengers, including the bus driver, were being treated at the hospital. He said the patients range from 19 to 76 years old. He said one of the patients was in serious condition, but everyone else was in satisfactory to fair conditions.

Clark Memorial Hospital spokeswoman Susan Friedrich said about 12:30 p.m. that a female passenger had been treated at the facility’s emergency room in Jeffersonville for minor injuries. She said the hospital has been told to expect an additional four passengers from the bus, but those people had not arrived.

The southbound lanes of I-65 were closed after the accident as ISP reconstructed the accident, but reopened about 1:30.

Indiana Gov. Mike Pence issued a statement upon learning of the bus accident.

“Our hearts go out to the Hoosiers impacted by this morning’s bus crash in Southern Indiana. The state of Indiana is coordinating a multiagency response, with Indiana State Police Superintendent Doug Carter traveling now to the area. As law enforcement and emergency personnel respond to this situation, we urge all Hoosiers to hold these men and women in their thoughts and prayers.”

This story will be updated as more details become available.

Popp writes for the Jeffersonville (Ind.) News and Tribune.