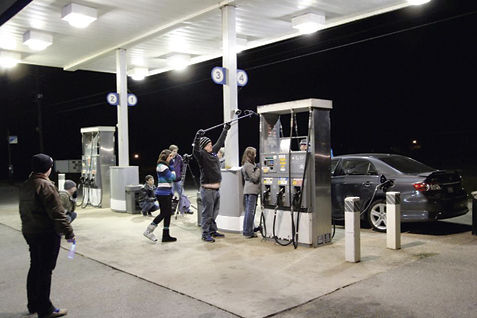 AMERICUS — The Georgia film and television industry is a large and prosperous entity, earning $5.1 billion this fiscal year. Georgia attracts film companies for reasons ranging from its varied geography to its tax incentives for film and television productions. Most recently, Georgia has been used as the filming location for scenes in movies such as the “Hunger Games” franchise and “Selma.”

Now that so many films are shot in Georgia, there is a demand for a workforce with the skills necessary to support these endeavors, but production companies that shoot in Georgia say they often struggle to find the workers they need.

One measure that is being taken to meet this need is the establishment of the Georgia Film Academy. In January, Gov. Nathan Deal announced that a portion of the 2015 state budget would fund the new initiative, which is expected to launch this fall as a collaborative effort between the University System of Georgia and the Technical College System of Georgia.

A new effort at Georgia Southwestern State University (GSW) is also preparing students for careers in the film industry.

The Department of Theater, Communication and Media Arts (TCMA) is now giving students the opportunity to experience the process of creating a movie, as it is currently shooting the department’s first major feature film.

The film, entitled “Which Way There,” is being directed by Joey Watson, Ph.D., assistant professor of communication and media arts at Georgia Southwestern.

The film follows a woman named Mavis and her experiences with time travel. Each time she awakens, she finds she has either been sent forward to the year 2115, or back to the year 1915. As Mavis is hurdled through time, she not only has different identities in each time period but also different love interests.

“It seems like she’s trying to decide between picking a time period or a certain man in each time period. At the end, she ultimately picks herself and what she wants to do, not what she’s supposed to do,” said Natalie Donner, the actress who portrays Mavis.

Donner is an Atlanta-based actress and has a degree in theater from Louisiana State University. While Donner was working on her undergraduate degree at LSU, Watson was also attending the university to work on his doctoral in communication studies, though they had known each other previously.

Donner began her career in theater but later moved into television and film. Her most recent work is the film “Bad, Bad Men,” a comedy shot in Memphis, Tenn., and set to be released later this year.

Watson co-wrote the screenplay for the film with Joanna Miller, a Los Angeles-based writer.

Formerly a playwright in New York, this is Miller’s first venture into screenplay writing. Miller graduated from New York University where she studied playwriting. She is both a writer and producer of many plays and television shows, and her work has been featured on networks such as NBC, Food Network and VH1.

Both Donner and Miller are former students of Watson.

“I have strong relationships with as many former students as I can,” said Watson. “What I mean by that is that we continue to learn from each other. Each semester, I learn just as much from my students as they hopefully do from me, so I see it as really special to keep working with each of them.”

Watson’s former students are not the only ones making large contributions to the film. Many GSW students are working as cast and crew members, including filling roles like assistant director and production coordinator.

“It’s been a great experience to work on the feature film. I have learned so much about myself and the whole process of film making by being the production coordinator,” said Anna Hall, a sophomore dramatic arts major from Buena Vista. “It’s really shown me that to be successful in the industry you have to be organized, know how to manage your time and be able to get things done under stress.”

In addition to this being the first feature film for the TCMA department, it is also the first opportunity for GSW students to learn about film production.

“Joey has given us the opportunity to do something that hasn’t been done at GSW. We’ve been able to work on many plays and musicals, but now we are also able to learn about the many facets of making a movie, and that’s wonderful,” said Megan Sleeth, a senior psychology major from Americus, who also has a degree in theater.

“Movie makeup and design is the field I would like to go into, and I’m thankful for the opportunity this movie has given me to gain experience in that area,” added Jessie Riaño, a senior dramatic arts major from Ellaville. “It feels fantastic to work with an experienced professor like Joey on a movie like this.

“I think it’s fair to say that I heard ‘action’ as soon as I came out of the womb, and I won’t stop until I hear ‘cut’ – so I’m still going,” Watson joked. “Life plays to me like a movie, as we interact every day, it’s like scenes being cut and spliced together, so I often tell folks ‘I’ll see you in the next scene’ when we separate.”

Watson’s interest in movie-making began during his childhood when he borrowed his uncle’s VHS camcorder to shoot videos and taught himself to edit those videos by connecting VCRs and splicing them together.

In college, he was trained on film cameras and over time transitioned with changes in technology in the film industry.

Although Watson has had the opportunity to work on large-budget feature films such as “The Expendables” and “The Firm,” he most enjoys independent projects because of the decrease in financial risk and the opportunity for more creative freedom.

Watson started the production company Old School Pictures in 2001, that works in Memphis, Los Angeles, Baton Rouge and Dallas. His previous work has been screened at film festivals such as the New Orleans Indie Film Festival, SXSW and the Memphis Indie Festival where he won Best Narrative Feature in 2002 and 2005.

Watson hopes to give his students the knowledge and skills necessary to work in the film industry.

“I want to simulate as much as possible the real experience of a film set so that our students can walk off a set here and onto one in Atlanta, Savannah or Los Angeles, and not miss a beat – whether they are in front of or behind the camera,” Watson explained. “I cannot emphasize the importance of this enough: It’s like getting hands-on training that is professionally accurate but without the pressure of losing $10,000 a day if you mess up.”

With the growing film industry in Georgia, these skills become even more important for those looking to work in the industry.

“As Georgia film production continues to boom, it has never been more imperative to support and sustain programs like this one that offer these unique experiences to our students,” said Watson. “It prepares them for an industry that we want to keep here – one way to ensure that is to properly train students for success.”

In addition to the large amount of work from Watson’s former and current students, there has been an outpouring of help from the GSW campus and the Americus community.

On campus, Ellen Elder and the nursing department allowed the TCMA department to use the nursing school facilities to shoot hospital scenes for the movie.

Several community entities also worked with the film crew to set up shoots for the film.

In addition, Pat Peacock from the advertising agency OnMedia in Albany volunteered his time as a producer of the film, and the Sumter Players have also provided support.

“It was truly magical to get that kind of collaborative support from within GSW as well as the city of Americus,” said Watson. “Honestly, it has to function like that – a community must rally behind projects like this that are locally based in order for them to happen because, at the end of the day, the project will represent our city and university.”

Shooting for the film began in November and picked up again at the end of February. Watson and crew made use of the local historical landscape, using the Lee Council House and Windsor Hotel to shoot the scenes set in 1915. The actors donned period costume for the scenes as well.

Work on the film will wrap next week with scenes from the year 2115, which will have an apocalyptic feel. To convey the apocalyptic atmosphere, shooting will take place in abandoned buildings around the city, including the abandoned medical building on Dodson Street.