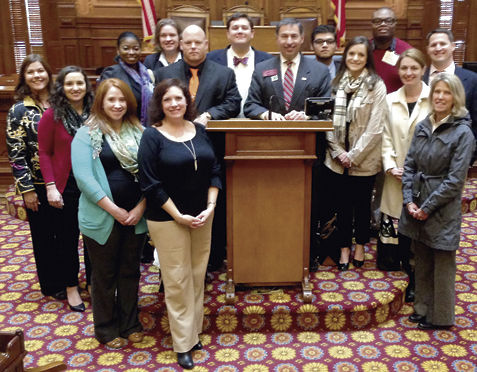 ATLANTA — Governor Deal closed the Capitol along with all government offices in 15 counties on Feb. 16. Acting on the recommendation from the State’s Emergency Operations Command, the Governor declared a state of emergency in order to open up state resources for disaster preparedness in areas expecting ice. Fortunately, the issues posed by the winter storms were minimal. Throughout the bad weather facing north Georgia these past days, the Emergency Operations Command force has proven itself to be ready and able to efficiently handle storm weather emergencies.

During the days that followed however, the winter weather did little to curtail activity under the gold dome. With the approach of Legislative Day 30, the last day for House bills to move to the Senate for consideration, the Capitol was abuzz. Any bills not passed the House by Day 30 will either die or have to be added to a related measure by amendment. With this important impending deadline comes an increase in effort to get bills moving. At any given time there are over 2,000 organizations represented.

Much debate surrounded HB 170 the Transportation Funding Act. On Wednesday, the House Committee on Transportation amended and favorably reported HB 170 by Rep. Jay Roberts, District 155 and Chairman of the House Transportation Committee, but the bill was recommitted for further review. Supported by the Georgia Chamber, the Act will provide nearly $1 billion in much needed funding for our entire state’s transportation infrastructure. This bill restructures the method fuel taxes are collected and distributed by the State and local governments. Although local governments are concerned about the effect on local revenue, these concerns are being heard and addressed as the bill passes through the committee process. Safe and efficient transportation is critical to the success our communities.

As James Nutt of Ellaville stated, “Addressing our transportation and infrastructure needs is a difficult challenge, but one that must be solved if we are going to remain the best state in the nation for business.”

A number of bills were successfully passed out of the House Chamber these past eight legislative days. Some of the significant measures included: HB 198 by Re. Katie Dempsey, District 13, which passed unanimously. Brittany McCumber and Kenneth Christmas from the Perry Wellness Center in Americus were at the Capitol when I cosponsored this legislation. This Bill requires that certified public school personnel receive annual training in suicide prevention. Local school systems must adopt a policy on student suicide prevention. The training materials are available for free. Suicide is the third leading cause of death among our nation’s children. We all hope that this measure will help to change this horrible statistic for the better.

HB 117 by Rep. Mark Hamilton, District 24, is merely the general house cleaning bill for Department of Labor. An important part of this bill, however, provides an exception within the unemployment code that would allow victims of family violence to voluntarily leave their jobs and still collect unemployment benefits. Unlike other claims, these claims would be charged to the unemployment insurance fund rather than the employer of the victim. This labor bill is also supported by the Georgia Chamber.

Finally, HR 304 by Rep. Sharon Cooper, District 43, encourages Georgia’s technical schools, colleges and universities to expand gerontology and dementia education and training to address the growing needs of an aging population. All of these measures that passed the House will now go across the hall for review and hopefully a vote for passage by the Senate.

During his remarks at Farm Bureau Day at the Capitol on Feb. 19, the Governor told GFB members that a compromise had been reached regarding the Georgia Soil and Water Conservation Commission. The Governor had originally requested that GSWCC be incorporated into the Department of Agriculture. This move concerned many farmers who felt that the agency would be less able to meet farmer’s concerns.

I believe we’ve reached a good solution and compromise. The bill is still in committee but should be sent to the floor of the House for a full vote soon.

A very significant bill, SB 5, was passed by the House after already passing the Senate. SB 5, presented by Rep. Ron Stevens, District 164, reasserts the power of the Georgia Ports Authority (GPA) to comply with the terms of federal loans and grants. This language is viewed as necessary for the receipt of more than $400 million in federal funding for the Savannah Harbor Expansion Project. After the House passed the measure, the Governor immediately signed SB 5 into law.

The House passed another Senate Bill, SB 53 which adds “licensed professional counselors” to the group of health professionals who have the authority to perform an emergency examination of a person and to certify whether a person requires treatment for a mental illness, alcoholism, or drug dependency. This bill now awaits the Governor’s signature.

Feb. 23 marked the 20th Legislative Day, as the General Assembly completed the half-way mark for the 2015 session. On the this date, the Governor released the Rural Hospital Stabilization Committee report. Following the Committee’s recommendations the Governor called for immediate action to be taken in order to meet the needs of rural hospitals across the state.

“The Rural Hospital Stabilization Committee tasked by Governor Deal has worked hard to achieve our goal of identifying and providing solutions for our state’s most challenging rural health care needs,” said Committee Co-Chair and state Rep. Terry England. “Together, with the support of the General Assembly, the Governor’s Office, and state agencies, we are committed through these recommendations to improve our rural hospitals.”

Proposed legislation supporting these proposals is expected to follow, although given the time constraints, I look for this to be an important work in progress with many issues carrying over to the 2016 Session.

Feb. 23 was also Leadership Day at the Capitol. Governor Nathan and Sandra Deal were featured speakers as leaders from across Georgia came together to celebrate the importance of strong, effective leadership, and meet with state/level leaders and organizations. Many members of Leadership Sumter were on hand to meet and mingle with their state legislators. Barbara Grogan, executive director of the Americus Sumter Payroll Development Authority and Angela Smith, of the Americus-Sumter County Chamber of Commerce, headed up this outstanding group. The House of Representatives recognized Leadership Sumter as my special guests. The professional members of Leadership Sumter did a great job representing our home district. Outstanding leaders are certainly being developed in our South Georgia community. I want to complement Barbara and Angela on doing such a great job in helping develop our current and future, business and community leaders.

On Feb, 25 I attended the Rural Caucus Meeting and the caucus heard from State Forester Robert Farris who spoke about the Georgia Forestry Association’s activities and concerns. I am particularly interested in issues surrounding our state’s forests. As the Sponsor of HB 255, a bill to ensure that state agencies fairly consider using Georgia forestry wood products when building and repairing state structures, I am well aware of the importance of forestry production. Responsible management of this valuable resource is important not only to preserve an ecological balance but also to keeping the State’s economy strong. I am proud to represent Georgia’s private forest owners through this important piece of legislation.

After returning from the Senate, the amended supplemental budget passed the House unanimously. It now goes to the Governor for signature. Before adjournment on Thursday, the House passed their version of the 2016 budget, HB 76, sponsored by House Speaker David Ralston. House Appropriations Chairman, Rep.Terry England, District 116, took over one hour to present the bill. After answering numerous questions and giving a detailed analysis of the state budget the House of Representatives passed HP 76 by a vote of 171-2. HB 76 is the $21.7 billion state budget plan for Fiscal Year 2016 beginning July 1, 2015. In the budget, 55 percent of state revenues are designated for education, 22.2 percent to health and human services agencies, and 8.7 percent to public safety agencies. This reflects an increase of $946 million, or 4.5 percent, over the original Fiscal Year 2015 budget. The House was able to fund a number of its priorities in the FY 2016 budget including enhanced funding for transportation in cash and the bond package; maintaining State Health Benefit Plan coverage for non-certificated school employees; funding for critical positions in state agencies; and support for rural hospitals and provider rate adjustments. The House budget bill now moves to the Senate for consideration. We had a special visit from U.S. Sen. Johnny Isakson.

Finally, the General Assembly passed an ambitious adjournment schedule, setting April 2 as the final legislative day. With legislative Day 40 less than a month away, things promise to move at a hectic and rapid pace.

Two young men from Americus were my pages this week. Gray Torbert and Adam Smith performed important duties in the House Chamber assisting state representatives. Gray was accompanied by his father George Torbert, member Sumter County Board of Commissioners. Adam was accompanied by his parents Wilkie and Nancy Smith. Wilkie Smith is the Sumter County tax commissioner and Nancy Smith is the clerk of Superior Court.

It was my treat to host Chris Thomas from Americus currently a student at Columbus State University. Also visiting from Americus, representing the Boys and Girls Club, was Grace Cato accompanied by her mother Cathy Cato.