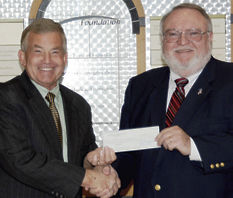 Proceeds from the Sumter EMC Foundation grant will be used to purchase training equipment for the new John Deere Tech agricultural technology program.

“One of the seven guiding principles that govern the way Sumter EMC operates is involvement in the communities we serve. This project is a great example of how good things happen when people in a community work together for a common goal,” said Crowder.

SGTC President Sparky Reeves thanked Crowder and the Sumter EMC Foundation for their support of the SGTC Foundation, the college, its students and its programs of study.

“Sumter Electric Membership Corporation and its Foundation have been tremendous partners for our college and foundation.  We appreciate them and their commitment to our college and the community. This is just one more example of how they give back to the community,” said Reeves.

The Sumter EMC Foundation was founded in 2003, and is funded exclusively by cooperative members participating in Sumter EMC’s Operation Round Up. Every month Sumter EMC “rounds up” the electric bill of participating members to the next whole dollar amount and deposits the difference into an interest bearing account.