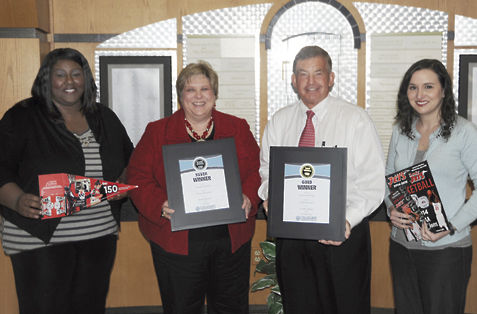 AMERICUS — South Georgia Technical College (SGTC) received a Gold Award for its marketing efforts for the third consecutive year in the national Collegiate Advertising Awards (CAA) competition recently. This is the top award for the colleges and universities with annual student enrollment between 2001 to 5000 students.  The award placed SGTC’s marketing efforts among the top 5 percent in the nation.

The college received the Gold Award for its single self-promotion entry of the SGTC Recruitment Pennant. SGTC’s Resource Development and Marketing department also received a Silver Award for its Jets and Lady Jets Basketball publications. A Silver Award places winners in the top 12 percent in the nation.

“South Georgia Technical College is pleased to be recognized for its outstanding advertising and marketing efforts for the third consecutive year,” said SGTC President Sparky Reeves. “Our marketing department does an outstanding job and it is an honor to for this organization to recognize our college marketing efforts as the best in the nation among our peers, not once, but three times.”

Last year the college took the Gold Award for its “Achieving Dreams for 65 Years” advertising program that was designed as part of South Georgia Tech’s 65th anniversary celebration. The year before, SGTC took first place for its “iCommit to Complete” total advertising strategy to promote enrollment, completion and graduation.

The Collegiate Advertising Awards program is an elite competition designed specifically for communication, marketing and advertising initiatives of colleges and universities from across the nation. More than 900 entries from throughout the United States and Canada were entered into the competition this past year.

All entries were judged by industry experts and scored on multiple criteria with a possibility of 100 total points.  Participants’ entries competed against similar-sized organizations in their specific groups and categories. In order to receive a GOLD award, an institution had to score between 95 and 99 points.  Only 5 percent of the college and universities in this competition received a GOLD award. A Silver Award scored in the 90 to 94 range and was considered among the top 12 percent in the nation.