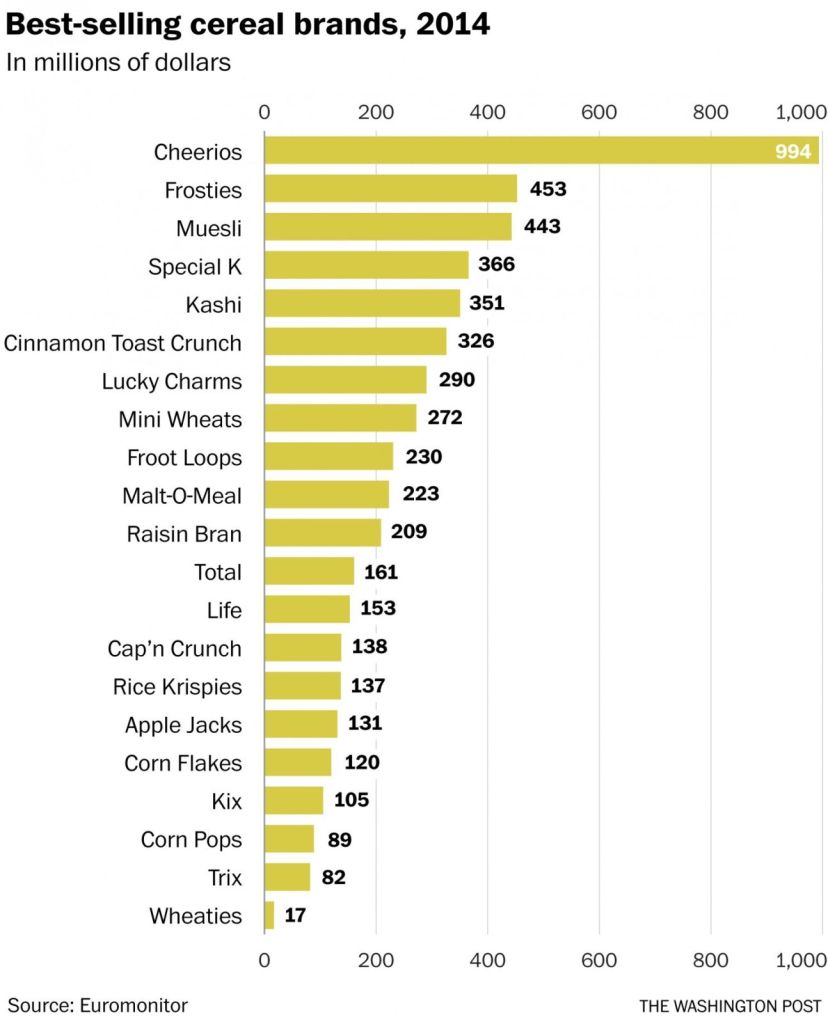 It’s a tough time to be in the cereal business. General Mills, the biggest seller of cereal in the United States, announced another disappointing quarter Wednesday morning, marking the sixth straight time the company has reported lower sales.

Breakfast cereal just isn’t the morning mainstay it once was, crowded out by other options such as yogurt, snack bars and breakfast sandwiches. And families aren’t sitting down to breakfast as often. Overall, cereal sales are down 6 percent since their peak in 2009, and they are projected to continue falling through at least 2019.

But while there has been a gradual slowdown in the cereal aisle, some breakfast cereals are still pretty popular.

Take Cheerios. The cereal brand is starved for growth, but it has shown remarkable resilience. General Mills, which makes Cheerios (along with a number of other popular carb-heavy morning meals), sold nearly $1 billion worth of the little circular guys last year, according to data from market research firm Euromonitor. While that’s a tad lower than 2013 sales, it’s still a hefty load of breakfast cereal. (Honey Nut Cheerios, for what it’s worth, has been the best-selling variety for years now, followed by regular Cheerios and Multi-Grain Cheerios).

Then there are a handful of cereals with higher sugar content that Americans still seem to love. Frosted Flakes is the No. 2-selling cereal brand in this country. Cinnamon Toast Crunch and Lucky Charms also remain popular.

Other cereals, such as the once-coveted brand Wheaties, have not fared so well over time. The “breakfast of champions,” which once ran ad campaigns starring such athletes as Michael Jordan, has been limping lately. Last year, sales of Wheaties dipped to $17 million, according to Euromonitor, marking at least the tenth consecutive year in which people bought fewer boxes of the whole-grain flakes. Corn Pops, which managed only $88 million in sales in 2014, also has fallen out of favor.

Over the past decade, several shifts have taken place atop the cereal world. Healthy cereals have, for the most part, bucked the downward trend. Muesli, the most resilient of the bunch, has been the only type of cereal to post consistent growth. Sales of the raw oat, grain and fruit mixture have climbed in each of the past nine years. Kashi, although it has struggled as of late, has posted considerable growth since the mid-2000s, too.

When you look more closely at the performance of each cereal brand over time, you can also see how well sugary cereals such as Cinnamon Toast Crunch, Lucky Charms and Froot Loops have fared. The three brands have seen sales jump considerably (by 35 percent, 30 percent and 17 percent, respectively) since 2005. And, perhaps more important, they have become more popular in recent years while other brands have struggled.

“There’s this odd dichotomy of people being very healthy at times, but then very indulgent at others,” Justin Massa, the chief executive of market research firm Food Genius, told CNN last year.

Some cereal brands that aren’t strongly associated with health or indulgence have been left behind. Wheaties has seen sales drop by nearly 80 percent over the past 10 years. Sales of Corn Pops have dipped by roughly 50 percent over that period. And Rice Krispies sales have contracted by 32 percent.

While some cereal brands have found ways to survive or even grow, there is still a lot of downward pressure on sales for one big reason: Busy American families pressed for time in the morning are looking for portable options, such as snack bars, that they can grab on their rush out the door. And the scene so often played out in cereal commercials — families gathered around a dining table, each person with a bowl of cereal and milk — isn’t as common as it used to be.