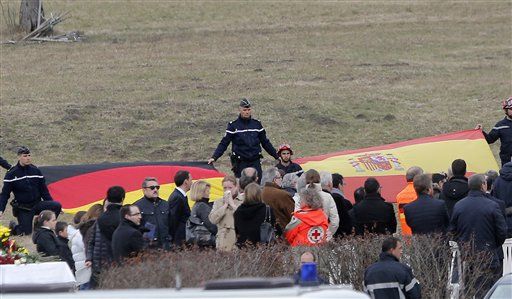 PARIS (AP) — Ignoring the captain’s frantic pounding on the door, the co-pilot of the Germanwings jet barricaded himself inside the cockpit and deliberately rammed the plane full speed into the French Alps as passengers screamed in terror, a prosecutor said Thursday.

In a split second, all 150 people aboard were dead.

The prosecutor said there was no indication of terrorism, though he did not say why investigators do not suspect a political motive. The inquiry is instead focusing on the co-pilot’s “personal, family and professional environment” to try to determine why he did it, Robin said.

The Airbus A320 was flying from Barcelona to Duesseldorf when it lost radio contact with air traffic controllers and began dropping from its cruising altitude of 38,000 feet. The prosecutor said Lubitz did not say a word as he manually set the plane on an eight-minute descent into the craggy French mountainside that pulverized the plane.

He said the German co-pilot’s responses, initially courteous in the first part of the trip, became “curt” when the captain began the mid-flight briefing on the planned landing.

Robin said the pilot, who has not been identified, left the cockpit when the plane reached cruising altitude, presumably to go to the lavatory. Then the 28-year-old co-pilot took control of the jet as requested.

“When he was alone, the co-pilot manipulated the buttons of the flight monitoring system to initiate the aircraft’s descent,” Robin said.

The pilot knocked several times “without response,” the prosecutor said, adding that the cockpit door can only be blocked manually from the inside.

The co-pilot said nothing from the moment the captain left, Robin said. “It was absolute silence in the cockpit.”

The A320 is designed with safeguards to allow emergency entry into the cockpit if a pilot inside is unresponsive. But the override code known to the crew does not go into effect — and indeed goes into a lockdown — if the person inside the cockpit specifically denies entry.

During the flight’s final minutes, pounding could be heard on the cockpit door as the plane’s instrument alarms sounded. But the co-pilot’s breathing was calm, Robin said.

“You don’t get the impression that there was any particular panic, because the breathing is always the same. The breathing is not panting. It’s a classic, human breathing,” Robin said.

No distress call ever went out from the cockpit, and the control tower’s pleas for a response went unanswered.

Air traffic control cleared the area to allow the plane to make an emergency landing if needed, and asked other planes to try to make contact. The French air force scrambled a fighter jet to try to head off the crash.

Just before the plane hit the mountain, passengers’ cries of terror could be heard on the voice recorder.

“The victims realized just at the last moment,” Robin said. “We can hear them screaming.”

The victims’ families “are having a hard time believing it,” he added.

Many families visited an Alpine clearing Thursday where French authorities had set up a viewing tent for victims’ relatives to look toward the site of the crash, so steep and treacherous that it can only be reached by a long journey on foot or rappelling from a helicopter.

Lubitz’s family was in France but was being kept separate from the other families, Robin said.

Helicopters shuttled back and forth form the crash site Thursday, as investigators continued retrieving remains and pieces of the plane, shattered from the high-speed impact of the crash.

The prosecutor’s account prompted calls for stricter cockpit rules. Airlines in Europe are not required to have two people in the cockpit at all times, unlike the standard U.S. operating procedure, which was changed after the 9/11 attacks to require a flight attendant to take the spot of a briefly departing pilot.

European budget airlines Norwegian Air Shuttle and EasyJet, as well as Air Canada, announced Thursday that they were adopting new rules requiring two crew members to always be present in the cockpit.

French prosecutors’ assertion that this week’s air crash was a deliberate act of the co-pilot, points to the possible need for a third pilot in airline cockpits, several aviation safety experts said.

“The flight deck is capable of accommodating three pilots and there shouldn’t ever be a situation where there is only one person in the cockpit,” said James Hall, a former chairman of the National Transportation Safety Board, referring to the “jump seats” all airliners are equipped with.

Neither the prosecutor nor Lufthansa indicated there was anything the pilot could have done to avoid the crash.

Robin would not give details on the co-pilot’s religion or his ethnic background. German authorities were taking charge of the investigation into him.

Lufthansa CEO Carsten Spohr said that before Thursday’s shocking revelations, the airline was already “appalled” by what had happened in its low-cost subsidiary.

“I could not have imagined that becoming even worse,” he said in Cologne. “We choose our cockpit staff very, very carefully.”

Lubitz joined Germanwings in September 2013, directly out of flight school, and had flown 630 hours. Spohr said the airline had no indication why he would have crashed the plane.

Lubitz underwent a regular security check on Jan. 27 and it found nothing untoward, and previous security checks in 2008 and 2010 also showed no issues, the local government in Duesseldorf said.

Lufthansa’s chief said Lubitz started training in 2008 and there was a “several-month” gap in his training six years ago. Spohr said he couldn’t say what the reason was, but after the break “he not only passed all medical tests but also his flight training, all flying tests and checks.”

Robin avoided describing the crash as a suicide.

“Usually, when someone commits suicide, he is alone,” he said. “When you are responsible for 150 people at the back, I don’t necessarily call that a suicide.”

In the German town of Montabaur, acquaintances told The Associated Press that Lubitz appeared normal and happy when they saw him last fall as he renewed his glider pilot’s license.

“He was happy he had the job with Germanwings and he was doing well,” said a member of the glider club, Peter Ruecker, who watched Lubitz learn to fly. “He gave off a good feeling.”

Lubitz had obtained his glider pilot’s license as a teenager, and was accepted as a Lufthansa pilot trainee after finishing a tough German college preparatory school, Ruecker said. He described Lubitz as “rather quiet” but friendly.

Lubitz’s Facebook page, deleted sometime in the past two days, showed a smiling man in a dark brown jacket posing in front of the Golden Gate Bridge in San Francisco. The Facebook page was restored after the French prosecutor’s news conference.