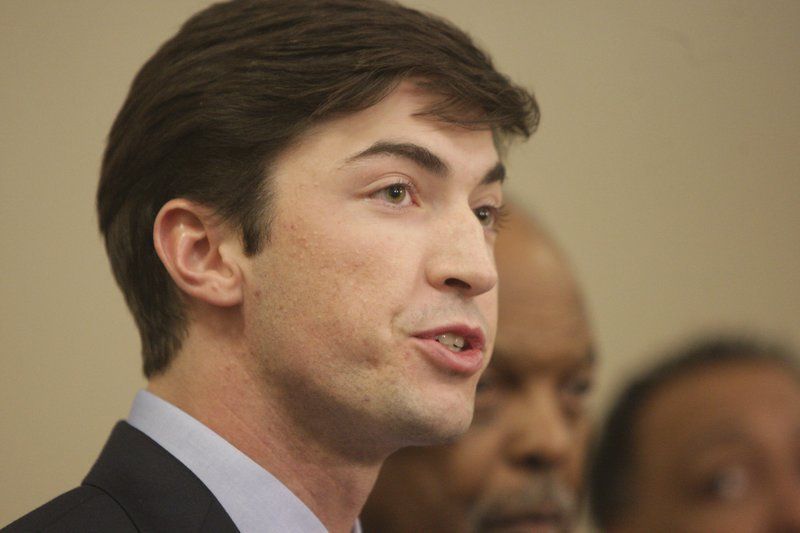 NORMAN— It took almost three weeks for the young man at the center of the firestorm surrounding a racist video at the University of Oklahoma to publicly apologize, but not much else.

Standing alongside Oklahoma state Sen. Anastasia Pittman and black civic leaders and clergymen, Levi Pettit said he was sorry Wednesday for his role in a video that went viral across the country.

Pettit was caught leading a chant on a bus full of Sigma Alpha Epsilon fraternity members and can be heard using a racial slur, as well as references to lynching.

Pettit followed Pittman at the podium after she indicated her support for the young man, who has become a lightning rod in the wake of the controversy.

“Let me start by saying that I am sorry,” Pettit said, “deeply sorry. I’m so sorry for all the pain that I’ve caused, I want you all to know that directly from me. Although I don’t deserve it, I want to ask for your forgiveness.”

Pettit said some people have asked why he had not spoken of the incident at any time during the 17 days since the bus ride. He said that he had not come forward before now because he wanted to come to Oklahoma City before addressing the nation to make his apology “to the community most directly impacted.”

Pettit continued by reading the letter he penned to President David L. Boren shortly after the story broke. He publicly thanked Boren for accepting his offer of remorse and expressed his love for the University of Oklahoma.

“What you and others saw in that video, was not who I really am,” Pettit read. “It’s not who I was raised to be, not who I think of myself to be.

“… I do want very much to find some positive outcome from this awful situation and to move forward with my life and attempt to make it right and make amends to the degree that I am able.”

Pettit thanked the leadership of the OU Sooners football team for hearing and accepting his apology and finished by thanking the black leadership gathered around him, expressing particular appreciation for Sen. Pittman.

“Meeting with a few people does not change what I did, but it has begun to change me and my understanding of those hateful words,” he said.

Pettit’s comments were followed by an abrupt question-and-answer period in which he several times indicated that he was not there to answer the question posed.

“Where did you learn the chant?” a reporter said.

“I am not here today to talk about where I learned the chant or how I was taught,” he replied. “I’m here to apologize for what I did.”

“It obviously can’t be easy for you to get in front of all these cameras, but a lot of people around the country were hurt not just by those awful words and the fact that they were said, but how they were said … What were you thinking?” another reporter said.

“I’m not here to talk about what happened on the bus,” he said. “Everyone here and across the nation has seen what I’ve done. I’m here to apologize for what I did.”

He was whisked away after only a few questions.