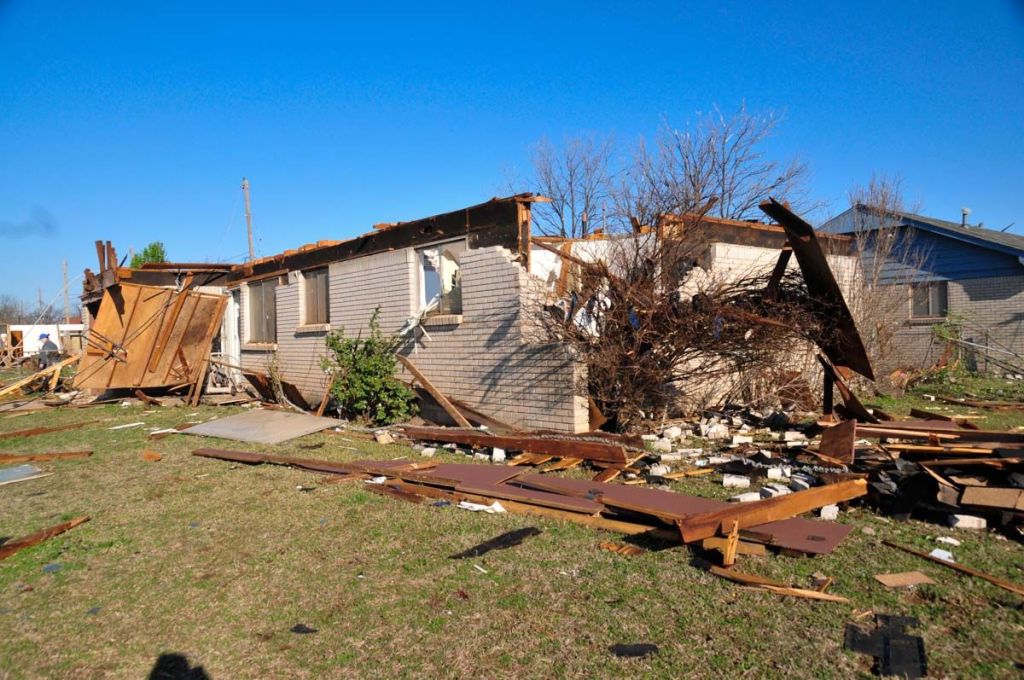 MOORE, Okla. — Joetta Strain stood in the front yard looking over her house. The roof of her Moore home had been taken off and the walls were in tatters. The house she had lived in since 1973 was demolished after being hit by a tornado Wednesday.

However, as Strain looked on at the damage that forced her to hide in a closet when the storm hit, she grasped a frame with an old wedding photo.

“This is my mom and dad,” Strain said. “They are deceased and I was more worried about this than anything. I’m just grateful for my life with what I just went through. Things can be replaced. It’s depressing and I’m sure it hasn’t hit me yet. I didn’t cry last night, I haven’t cried today. But I’m sure I will.”

Strain lives across the street from Southgate Elementary, where Oklahoma Gov. Mary Fallin was early Thursday morning when she declared a state of emergency after touring areas of Moore that were damaged by the tornado which skipped across the city at about 6:30 p.m. Wednesday.

The school, built in 1962 and one of Moore’s oldest, was one of the hardest hit structures in the city.

“I’ve already declared a state of emergency in 25 counties across the state, which will allow the state of Oklahoma to be able to begin the process of assessing damage and looking at should we qualify for any federal assistance,” Fallin said. “It also allows us to speed up the services in our state.”

It comes almost two years after Moore was hit by an F4 tornado May 20, 2013 that destroyed one elementary school and killed seven children and badly damaged a second school.

“I’m very thankful that the school didn’t receive this damage during school hours. We’re thankful that no children received any injuries.”

One death was confirmed from the tornadoes that hit several parts of the state Wednesday. It occurred in Sand Springs when a twister struck a mobile home park.

At least 16 persons received treatment for minor injuries at Norman and Moore hospitals. Additionally, police are investigating a fatal crash in Norman that could be weather related.

Besides the sheer size of Wednesday’s tornado, one of the biggest differences with the F4 from May of 2013 was the loss of life. State and local officials credited the system they have in place to help saving lives. That includes a tornado siren that Moore Mayor Glenn Lewis and Office of Emergency Management director Albert Ashwood said they heard Wednesday night.

However, Strain and other residents around Southgate said they didn’t hear a siren until the tornado was already on the ground, if they heard one at all.

“I was watching on TV and they told me it was on 12th and Eastern,” said Sherri Dearing, who lives next door to Southgate. “I thought OK, it’s not near me. Then the lights when off and I started to hear the wind pick up. I put everybody in the closet. Heard the roaring sound, windows blowing out. Then I heard it go over it and past. I knew it was gone and done and over with.”

Classes were canceled in Moore today and in the neighboring Western Heights district. Southgate students will be moved to a church starting next week to finish classes.

For Moore Mayor Glen Lewis, who has been through 12 tornados himself, he and his city have gotten the routine down on what they have to do when a twister strikes.

“Almost everybody in town does,” Lewis said. “That’s kind of the unusual thing about Moore. We don’t have to call the off duty officers or firemen in. They came in automatically. Every employee showed up right after it happened as soon as they could get there. We don’t have to call and ask for help. Last night we had 250 volunteers from Serve Moore.”

Even though many of the people who live in Moore have been through multiple tornados, dealing with the aftermath doesn’t always get easier.

For Dearing, who has been through five, seeing her grandchildren now having to go through the entire ordeal is what causes her the most angst. Two grandchildren piled into a closet with her when Wednesday’s storm hit.

“This is the second time for my grandson,” Dearing said. “He went to Plaza Towers. So they were very upset. They didn’t know where their mom was or their dad. He got in the closet and was praying for them. Praying for everybody to be safe. It’s very tough. He already has a learning disability from knowing that seven of his friends died at Plaza Towers. We’ve moved twice since the other tornado.”

Despite being at the same location for 42 years and enduring multiple tornados, Strain has never had to move. But after having to hide in a closet to save her life and having her home destroyed, she may have to rethink her normal plan of action.

“The door was opened about so much and I was hanging on to it,” Strain said. “Then when I come out everything was gone. The roof and everything. I have lived in Moore since 1971. I’ve had damage in probably five of them. Minor damage. I kept saying one of these days it’s going to get me and it did.”