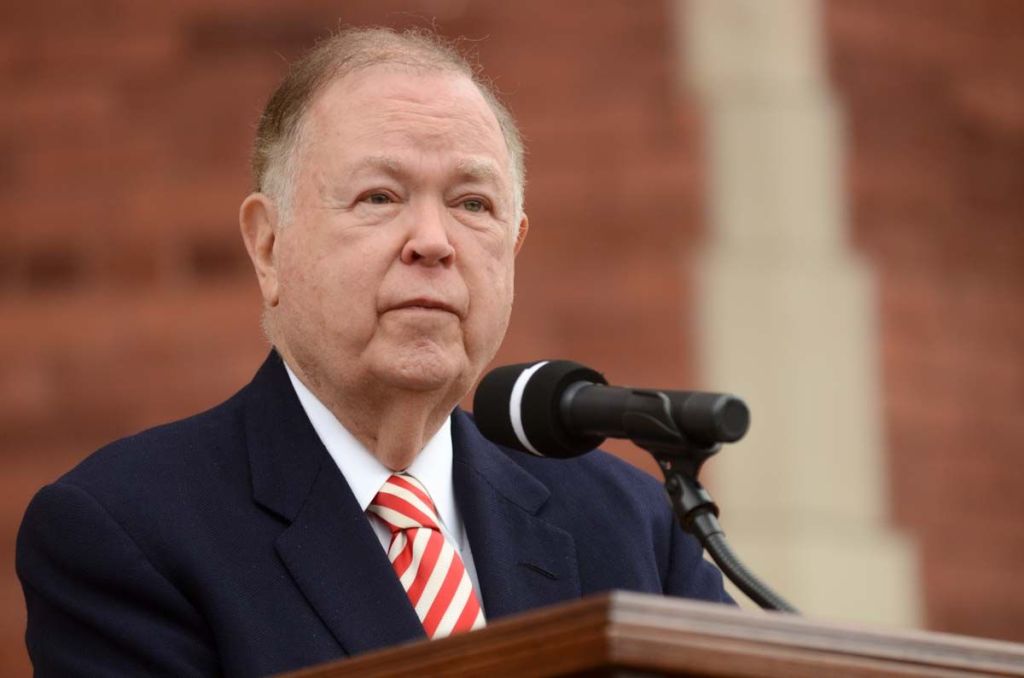 Boren also said about 25 students will be subject to disciplinary measures as a result of participating in that racist chant while on a bus en route to the SAE Kappa chapter’s Founder’s Day event in Oklahoma City on March 7.

Boren said that racism is not just a problem at OU or in universities across the nation.

“This is a problem in America,” he said. “We’ve had an epidemic of racism all across our country.”

The chant captured on a cell phone video drew national attention for its shocking racist language and references to lynching. The video quickly went viral online and the university began investigating the following day.

The national SAE organization immediately revoked the OU chapter’s charter. Boren also took quick action, moving fraternity members out of the chapter house which is owned by OU and expelling two students believed to be leaders of the chant.

High school students on board the bus as potential recruits of the fraternity were also subjected to the chant, Boren said. While the news was shocking and disturbing, the problem of racism is not limited to the university culture, he said.

“We can stop it if all of us… say, ‘we have zero tolerance for racism in America,” Boren said.

Following the March 7 incident, Boren said the university did a “comprehensive investigation” into how the chant arrived on the OU campus and how it was learned and became institutionalized within the chapter.

Boren said there is no indication the chant was part of any formal teaching by the national organization, but it does appear the chant was widely known and shared informally among members.

During Friday’s press conference, Boren read a letter wherein he posed questions to the national SAE organization, asking whether SAE is conducting an investigation to learn how far the chant has spread by individual chapters. He also wants to know what steps SAE will take to remedy the situation.

The national organization has not yet responded to media requests for comment.

University officials in the Office of Student Affairs conducted interviews and learned, in addition to the source of the chant, that prior to the chapter’s Founders Day event on March 7, alcohol was consumed by a “significant number of chapter members” prior to boarding the bus.

About a dozen high school students were at the house where alcohol was present and were also exposed to the chant while on the bus.

In addition to the expulsion and permanent withdrawal of two students, Levi Pettit, from Highland Park in Dallas and Parker Rice, of Dallas, other disciplinary action was handed down to an additional two dozen or so students. Boren said students participated in the chant to varying degrees and will be subject to community service and mandated cultural sensitivity training. Officers of the fraternity have met with representatives of affected student groups and apologized.

The university also will soon appoint a new vice president for the university community to deal directly with diversity and sensitivity issues and will report directly to President Boren.

Stopping racism lies with each individual who must stand up and object to inappropriate phrases, statements and actions, he said. Boren vowed that the university will use this crisis as an opportunity to move forward in a positive way and begin to bridge the gap between races.

“Join us in this policy of zero tolerance toward racism,” he said. “Everyone has it within his power or her power to put a stop to it.”