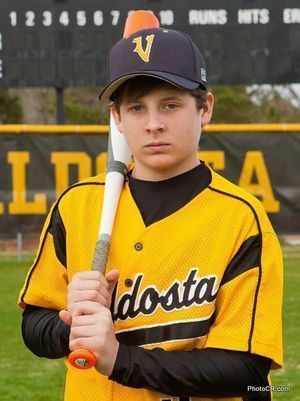 Shaw, 14, was struck between the fifth and sixth innings Wednesday at Ike Aultman Field in Moultrie while in the visitor’s dugout during the junior varsity baseball game.

Despite a quick response by Colquitt County, Georgia athletic trainer Ryan Kebler, who witnessed the throw striking Shaw, and Shaw being life-flighted to Tallahassee, Florida Memorial Hospital shortly after, he remained in critical condition and on life support Thursday morning.

At about noon, he was taken off life support and passed away, according to school officials.

“It’s a terrible tragedy,” Valdosta High Athletic Director Rance Gillespie said. “It’s a terrible loss to our school and our baseball program. Our thoughts and prayers go out to the Shaw family.

“We really appreciate the thoughts and prayers from the entire community.”

Kebler saw the accident occur and darted to Shaw’s side. He was soon joined by members of the Colquitt County Emergency Medical Services team and an unidentified trauma nurse who was in the Valdosta stands, according to The Moultrie Observer.

“I saw the ball hit him and he grabbed his head,” Kebler told The Observer. “He took a couple steps and fell and when I saw him fall, I knew it was serious.

“It was just an accident, a freak thing.”

Valdosta High offered grief counseling for students Thursday and the VHS chapter of the Fellowship of Christian Athletes held a prayer vigil on campus Thursday morning, said Jennifer Steedley with the Valdosta City Schools. The Observer reported that grief counseling was also made available at Colquitt County High School.

An FCA-sponsored candlelight vigil planned for Thursday night was canceled due to the inclement weather in the area, Steedley said.

All VHS extracurricular activities for Thursday were also postponed, as was the Wildcats’ varsity baseball game today at Lee County.

“Our thoughts and our prayer are with Colton and his family and the entire Valdosta City Schools family because this has affected all of us,” Steedley said. “It’s truly devastating.”

Colquitt Principal Stephanie Terrell told The Observer: “My heart goes out to the family. They have been in my prayers since I heard about the accident.”