Weekly report to the people 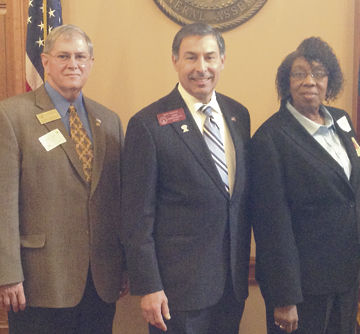 With little time left to spare, the members of the Georgia General Assembly are rapidly reviewing bills and weighing the varying public interests served by each in order to best determine which measures should be passed. Despite the now constant hectic pace, it is always a pleasure to see our hometown folks at the State Capitol building. On Wednesday, March 4 (Legislative Day 26)  Schley County Commissioner, Angeli Smith and Sumter County Commission Chairman Randy Howard came to the capital to promote economic development in our area. Recognizing the importance of providing high-quality good paying jobs for the citizens of our area, Commissioners Smith and Howard met with the folks at the Georgia Department of Economic Development and other state agencies to help us recruit business opportunities in Southwest Georgia. Commissioner Smith and Howard left no stone unturned in promoting our area. I am truly grateful for the leadership that they both provide.

On Legislative Day 28, Monday, March 9 Rep. John Meadows, District 5, chairman of the House Rules Committee, put HB255 on the supplemental debate calendar. That afternoon I had the pleasure of presenting this legislation to the members of the House for a vote. HB255 provides for fair and environmentally friendly certifications for wood products to be used in the construction of government buildings. It puts into code an executive order that Gov. Deal made on Aug. 10, 2012. The measure is supported by the Georgia forestry industry and is intended to help promote the use of Georgia-grown wood in the construction and repair of state-owned structures. Following my presentation, the House passed the bill by a vote of 120-44 and it now goes to the Senate for further consideration.

Later that day I attended a reception honoring Tom Daniel, the senior Vice Chancellor for External Affairs for the Board of Regents.Tom is retiring following his extensive career as the University System’s long-time governmental affairs representative. He began his tenure with the nation’s fourth-largest system of higher education in 1982, as special assistant to the chancellor and joined the Board of Regents after having worked for Georgia Gov. George Busbee. Visiting me from Americus were Mr. and Mrs. Charles Strickland and their daughter Cindy and her husband George.

Every year Jud Peacock brings the eighth-grade class from Marion County Middle High School to the Capitol. I have the opportunity to explain the legislative process from the “Well” of the House Chambers.

The students always amaze me at how bright and knowledgeable they are. And on more than one occasion I have had to look up the answer to their questions. I want to publicly thank Jud Peacock for his dedication and his many contributions to providing the best education possible for his students.

On March 4 and 11, I attended meetings of the Rural Caucus. At the first meeting, legislators heard a presentation by Sheila Goffe, firector of Government Relations for the American Kennel Club. She spoke at length about canine legislation and its relationship with rural and sportsmen’s issues. Hunting with dogs and the bond between hunters and their dogs is an important part of our American heritage that should not be subject to unnecessary government interference. At the next meeting, we heard from the Cancer Treatment Centers of America (CTCA) which is currently located at Southeastern Regional Medical Center in Newnan. The CTCA proposed changes to Georgia’s certificate of need requirements. These laws restrict the number of beds that CTCA can have at its Newnan hospital. The goal of CTCA is to make cancer treatment more readily available, particularly to those in rural areas and to try and avoid forcing Georgia cancer patients to seek treatment at hospitals outside of Georgia.

Wednesday, March 11 was Civil Air Patrol day at the Capitol. I had the honor to introduce the Chaplain of the Day, Chaplain Lt. Col. Elise Whitworth. This special servant of God is not onlyan active member of the Civil Air Patrol, U.S. Air Force Auxiliary, but she has also worked to launch multiple adult training centers, served as an in-house director of a safe house for victims of domestic violence, and volunteers as a police chaplain. It was an honor to introduce this loyal American and dedicated service member.

Later that day, I took part in a legislative tour of the Atlanta branch of the Savannah College of Art and Design (SCAD). This private, nonprofit university specializes in all areas of the arts including communication, fashion, interior design,photography, animation, video and film production as well as program and story creation. The school also maintains a world renowned state-of-the-art digital media center. This outstanding school boasts of more than 11,000 students and is considered one of the top schools in the area of creative arts.

Friday the 13th brought Legislative Day 30, referred to as Crossover Day. It was a lucky day indeed for over 50 bills that passed the House on three different debate calendars. “Crossover Day,” means that any bill that has not been voted out of its chamber of origin following Day 30 is no longer eligible for final passage. While there are many important provisions pending before the legislature, some of the more notable bills which remain alive, still hoping to become law, are as follows.

• Public Safety: HB325 requires the use of seatbelts in vans with up to 15 passengers but only applies to passenger vans manufactured after July 1, 2015. HB71 imposes newrequirements on the State Board of Pardons and Parole designed to make the process more open and transparent when the board makes findings and takes votes. HB118 makes it illegal to hold or reach for a cellphone while operating a commercial motor vehicle (generally large 18 wheelers). HB 461 modifies laws relating to secondary metals recyclers. This bill represents the legislature’s continuous effort to try to control scrap metal theft in a manner that can be fairly enforced. HB 263 implements the recommendations of the Criminal Justice Coordinating Council (CJCC) regarding the juvenile code, family violence shelters and social services. The changes allow the CJCC to distribute grants from the federal Department of Justice.

Education: HB315 would change the name of the State Board of the Technical College System of Georgia to the State Board of the Georgia Career College System. SB133 would allow for the creation of an Opportunity School District (OSD), a mechanism that permits the State to intervene in failing schools through a new system that would be controlled under the Governor’s Office of Student Achievement. Under the proposed model, the OSD would give individual school leaders more flexibility to achieve better results in exchange for increased accountability. SB2 allows a high school student who has completed ninth- and 10th-grade requirements to enroll in a qualifying post-secondary institution and pursue an associate degree, technical diploma or industry certification program while counting that coursework toward high school graduation requirements. The bill further aligns our K-12 education system with our university and technical college systems and allows students to simultaneously access both. This helps students achieve their academic goals and become employed faster which increases the number of available, qualified employees for businesses — keeping Georgia economically competitive. HB504 requires newly admitted students living on campus to receive a vaccination against meningococcal disease and allows pharmacists to administer the vaccines.

Health Care: HB362 allows school systems to stock asthma medication which may be administered to a student for respiratory distress by a trained employee. HB210 allows organ donation through a state- issued I.D. card just as you already can on a driver’s license. HB 504 expands the types of vaccines pharmacists can administer, including vaccines for pneumococcal disease, shingles and meningitis. HB195 allows a pharmacist to substitute a biosimilar product with an interchangeable FDA-approved biosimilar product in order to provide the best possible treatment to patients at the lowest price. HB511 allows a pharmacy technician to fill a remote automated medication system. These units are pharmacist controlled, and may be located outside employer sites, in universities, in prisons and other remote locations, such as nursing homes. HB 314 combines the Georgia State Board of Cosmetology with the Georgia State Board of Barbers. HB183 changes definitions relating to “private home care provider” to ensure that caregivers who are not licensed health care professionals are properly supervised. This bill only affects licensed private home care provider companies which are employing unlicensed staff and not individuals who personally hire unlicensed individuals to serve as a caregiver, companion or sitter.

Jobs & Agriculture: HB439 “Georgia New Markets Jobs Act” helps new start-up entrepreneurial small business owners grow. The state provides matching fund investments and upfront tax credits with repayments postponed until the business has had an opportunity to grow. HB 374 includes forestry machinery as equipment that is exempted from ad valorem taxation while held in a dealer’s inventory. A Bill that has already passed the legislature and been sent to Gov. Deal for his signature is HB292 which allows for a $500,000 state tax exemption for a farmers’ business assets concurrent with the federal allowance.

Transportation: After a long debate on the floor of the House of Representatives, the members voted 123-46 to send HB170 to the Senate.Last year, a Joint Study Committee on Critical Transportation Funding reportedthat the state needs an additional $1 billion to $1.5 billion per year in order to maintain our current infrastructure. HB170 mainly proposes to move the tax collection method from the current sales tax on motor fuel to a per-gallon excise tax in order to raise the revenues needed. Speaker David Ralston and members of the House of Representatives from both parties have a steadfast commitment to delivering legislation that creates a dedicated, predictable and sustained funding stream for transportation maintenance, modernization and new development. HB319 codifies the Governor’s Executive Order from last December which suspends the collection of any motor fuel taxes that differed from that of the taxes levied as of June 1, 2014, thereby keeping the tax at a steady and predictable level despite the great fluctuation in gas prices.

Government Administration: HB192 limits the ability of counties, municipalities and other government entities to use government purchasing cards. HB279 gives state salary increases to district attorneys, public defenders, and judges of the superior court, Supreme Court and Court of Appeals. HB310 essentially divides up the Department of Corrections and the State Board of Pardons and Parole and creates the Board of Community Supervision; the Department of Community Supervision; and the Governor’s Office of Transition, Support, and Reentry. These agencies would assume the duties related to probation and parole previously held by these other agencies with the goal of making supervision services more efficient.

Leslie Farr and Emma Griffin where my pages this week. They were accompanied by Leslie’s father, Paul Farr, who is an instructor at South Georgia Technical College.