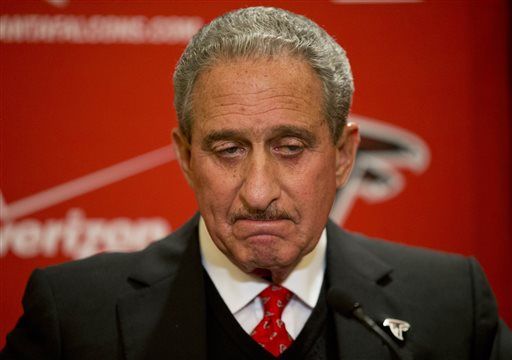 In this Dec. 29, 2014, file photo, Atlanta Falcons owner Arthur Blank pauses while speaking at a news conference in Atlanta. The NFL has fined the Falcons, stripped the organization of a draft pick and suspended team president Rich McKay from the league’s Competition Committee beginning April 1 following the team’s use of fake noise at home games. In statement released Monday, March 30, 2015, the league announced that the Falcons have been fined $350,000 and will forfeit their fifth-round selection in the 2016 draft. If the Falcons have multiple picks in that round, the highest selection will be forfeited. Falcons owner Arthur Blank told The Associated Press in early February that he had seen enough of the NFL’s investigation at that point to acknowledge wrongdoing by his club. (AP Photo/David Goldman, File)