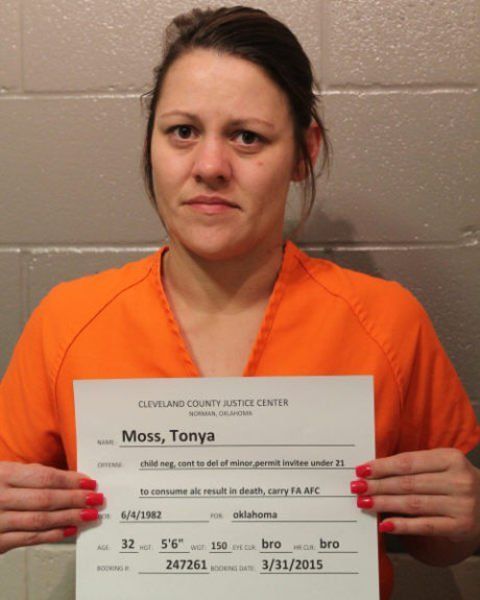 Authorities in Oklahoma have arrested two people in connection with a weekend gathering that led to the death of a Lexington, Okla., teenager.

Officials said their investigation shows Moss and Moore threw a party for teenagers and allowed numerous juveniles to drink alcohol at a Lexington residence Saturday.

In Oklahoma, a person who permits anyone under 21 to possess or consume alcohol or controlled dangerous substances resulting in great bodily harm or death can be charged with a felony.

About 9:30 a.m. March 29, the sheriff’s office received a call about a 15-year-old male who was unresponsive at a residence in Lexington. When deputies arrived, they determined that Faught was dead. Faught didn’t reside at the home.

The State Medical Examiner’s Office has conducted an autopsy on Faught. The report is pending; however a preliminary examination showed there were no injuries resulting from foul play.

According to the Norman Transcript, investigators continue to gather more details and interview witnesses. The Lexington Police Department assisted CCSO deputies with the arrests.

Formal charges against Moss and Moore are pending in Cleveland County District Court.

Sheriff Joe Lester said adults should never allow anyone under 21 to consume alcohol for any reason.

“It’s a tragedy that a 15-year-old boy lost his life because two individuals failed to look out for the safety and well-being of him and the group of teenagers who were at their home over the weekend,” Lester said. “Both people will be held accountable and have to deal with the tough consequences of their actions. Any parent who is considering allowing children to use alcohol or drugs should remember what happened to Nicholas Faught and make the right decision.”

The Norman (Okla.) Transcript contributed to this story.