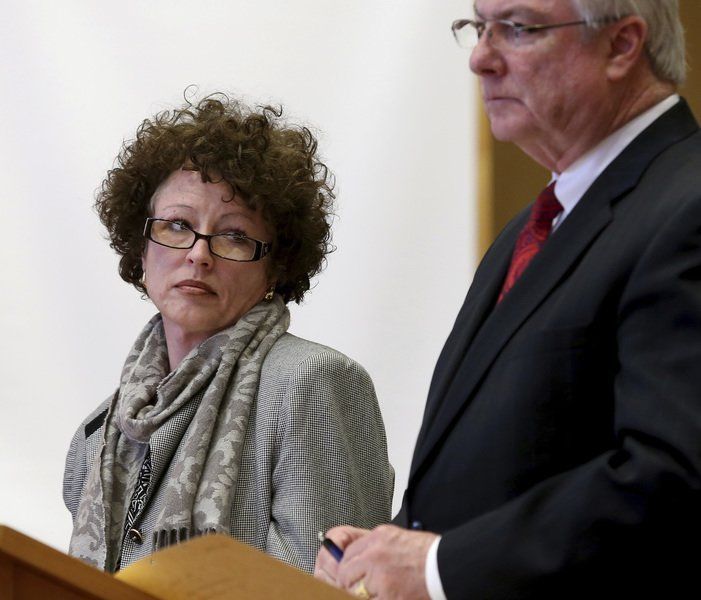 NORTH ANDOVER, Mass. — A mother accused of charging $5 admission to an underage drinking party at her home pointed the blame at her estranged husband in court Tuesday, according to the Eagle-Tribune.

Patricia Frank, 48, said she arrived home Friday and discovered a party at her home — a “rave” gathering that she says her estranged husband promoted on social media, according to her defense attorney Thomas Sheehan.

Frank is embroiled in a “bitter divorce,” Sheehan said.

The mother of three teens is charged with selling or delivering alcohol to minors and keeping a noisy and disorderly house.

She was arrested Friday night after police broke up a party attended by an estimated 50 young people at her home. The youths told police she charged them “$5 each to get in” and that she was also at the party “messed up,” according to a police report.

A police report said Frank smelled of alcohol and was unsteady on her feet when the arrived at her house. Police also found two of her teen-aged children in the house, amid liquor, beer and drug paraphernalia, Friday night, according to a police report.

At the request of Assistant District Attorney Lindsay Nason, Frank must also undergo a mental health evaluation and submit to any treatment plan and comply with any family plan suggested by the Department of Children and Families, which is also involved in the case.

She was additionally ordered to abstain from drinking any alcohol and to stay away from anyone under age 18, with the exception of her three children, ages 13, 14 and 16.

Frank was late for her arraignment Tuesday and was not in the courtroom when her case was initially called. Judge Ellen Caulo issued a default warrant for Frank’s arrest.

However, Frank showed up in the courtroom a little over an hour later, causing Caulo to pull back the default warrant. When asked by the judge where she was on the first call, Frank said she may have been checking in with the probation department and in the ladies room.

Police went to Frank’s home just after 9 Friday night after receiving a report of an underage drinking party there “with an adult homeowner .. charging an entrance fee to get into the party,” according to a report.

When police arrived, some youths ran into the nearby woods and there was a strong smell of marijuana in the area. There was also a “large amount” of parked cars near the house, according to police.

When officer Michael Gilligan questioned Frank, she said there was no party going on at her home and the only kids there were her sons. Gilligan said Frank smelled of alcohol and was unsteady and he could also hear “banging and movement going on in the house,” he wrote in a report.

During questioning, Frank told Gilligan there was 15 to 20 kids in her basement “but I was not allowed to go down there,” Gilligan wrote. Gilligan, with other North Andover officers present, told Frank they were “not leaving knowing there were juveniles and alcohol in the basement.”

Frank then ran through her garage and into her basement, locking the door, Gilligan said. As he repeatedly knocked on the basement door, Frank “opened the door and then slammed it shut while she exited.”

Gilligan said he then heard sounds of smashing glass and loud thuds from the basement.

“I told Frank to open the basement door and she delayed for about 30 seconds. Once it was open, this officer immediately smelled a strong odor of marijuana coming from the basement,” he said.

He found about a dozen kids hiding and sitting on a couch, while others were escaping through a broken window, he said. There were beer cans and bottles, bottles of vodka and “a large bong, used to smoke marijuana” in the basement, Gilligan wrote.

Frank was taken into custody, he said. Police also took the names and addresses of the teens in the house and allowed them to call their parents and make arrangements to get home.

Police interviewed some of the youths at the party. They told them 25 to 30 kids escaped through the broken window in the basement.

One boy “told this officer that the mother was ‘whacked’ and was charging $5 a person to get in the house.” The boy also told Gilligan “the mother knew the whole time what was going on.”

Police then found two more boys hiding behind a basement couch. They were Frank’s younger sons, ages 13 and 14, Gilligan wrote.

Jill Harmacinski writes for the Eagle-Tribune in North Andover, Mass.