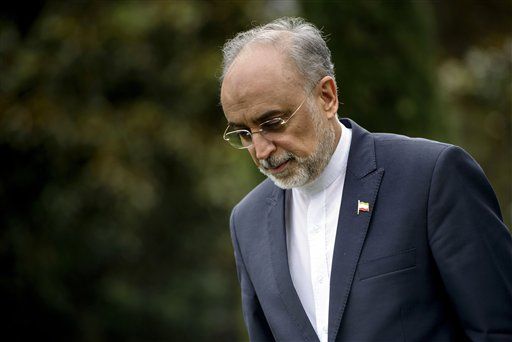 LAUSANNE, Switzerland (AP) — Iran and six world powers have agreed on the outlines of an understanding to limit Iran’s nuclear programs, negotiators indicated Thursday, as both sides prepared for announcements.

European Union foreign policy chief Federica Mogherini tweeted that she would meet the press with Zarif after a final meeting of the seven nations in the nuclear talks. She wrote: “Good news.”

The officials spoke following weeklong talks that have been twice extended past the March 31 deadline in an effort to formulate both a general statement of what has been accomplished and documents describing what needs to be done to meet a June 30 deadline for a final accord.

Mogherini and Zarif were to read out the same statement in English and Farsi. Zarif and U.S. Secretary of State John Kerry were then expected to brief reporters separately.

The U.S. and five other countries hope to curb Iran’s nuclear technologies that could be used to make weapons. Tehran denies such ambitions but is negotiating because it wants a lifting of economic sanctions imposed over its nuclear program.

Pressured by congressional critics in the U.S. who threaten to impose new sanctions over what they say is a bad emerging deal, the Obama administration is demanding significant public disclosure of agreements and understandings reached at the current round. Iran wants a minimum made public at this point, describing previous two-stage deals as detrimental to their interests, officials say.

The Iranians want any results from talks in the Swiss city of Lausanne described less as a deal and more of an informal understanding.

The talks resumed Thursday after a flurry of overnight sessions between Kerry and Zarif, and other meetings involving the six powers.

Iran also wants to get rid of sanctions that have stifled its economy. The U.S. and its partners want detailed documents on the steps Iran must take by the end of June on its nuclear program.

One problem, said Zarif, has been differing voices among the other side at the table — the United States, Russia, China, Britain, France and Germany — making it difficult for them “to reach a coordination.”

Russian Foreign Minister Sergey Lavrov, who left Lausanne Tuesday, said the two sides were close, the Interfax news agency reported. There are “only a few steps left to take or, in some cases, even-half steps, and some things have already been agreed upon,” he said.

The talks — the latest in more than a decade of diplomatic efforts to curb Iran’s nuclear prowess — hit the weeklong mark on Thursday, shortly before the State Department announced they would go into double overtime from the March 31 deadline for a political framework.

As the sides bore down on efforts to get a deal, German Foreign Minister Frank-Walter Steinmeier canceled a planned visit to Lithuania, Estonia and Latvia. French Foreign Minister Laurent Fabius was also back, less than a day after leaving the city.

By blowing through self-imposed deadlines, President Barack Obama risks further antagonizing lawmakers in both parties who are poised to take their own action to upend a deal if they determine the administration has been too conciliatory.

The initial response to the extensions from Republicans suggested they already reached that conclusion. “It is clear, the negotiations are not going well,” Sens. John McCain of Arizona and Lindsey Graham of South Carolina said in a statement. “At every step, the Iranians appear intent on retaining the capacity to achieve a nuclear weapon.”