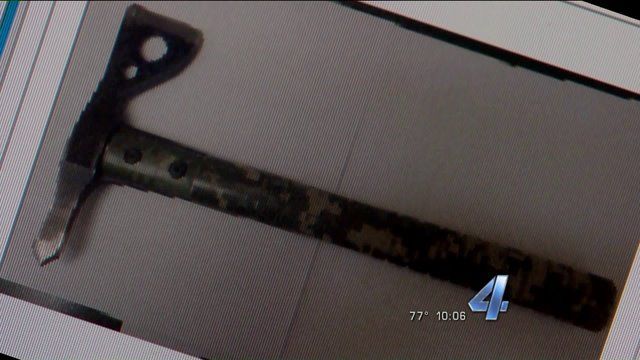 Keith Vancamp of Chickasha, Oklahoma was arrested for assault after allegedly threatening a woman and her dogs with a tomahawk.

According to a Chickasha Police Department incident report, Vancamp complained to his neighbor that her dogs were making too much noise.

The neighbor, Pamela Freeman, said she and Vancamp got into an argument after he knocked on her door to complain. Instead of continuing the argument, she stayed in her residence and shut her door.

Freeman said a few minutes later, someone was knocking very hard and rapidly on the front door.

When Freeman answered it, Vancamp had a “hatchet” in his right hand, the incident report said. At the same time, Vancamp reached out and tried to open the screen door.

“Pamela said Keith raised the hatchet above his head, was waving it around, and was yelling at her. Pamela told me Keith said, ‘I will kill you and your dogs,” Officer Bellan Gornick stated in the incident report.

When the police arrived, Freeman said she thought Vancamp had gone home, but he was not there when police went to his residence.

After contacting Vancamp, Gornick asked him where the hatchet was.

Vancamp replied, “Hatchet? I’m an Indian. It was a tomahawk,” the incident report said.

According to Vancamp, Freeman’s dogs were making a lot of noise. When Vancamp asked her to keep them quiet, she got mad at him, Vancamp stated. He said when Freeman went back into her house, she pounded on the partition separating their duplex.

CPD retrieved the tomahawk along with another large knife. The tomahawk was sheathed in a shoulder strap. Gornick asked Vancamp if it was sheathed when he threatened Freeman. Vancamp said the sheath was off. He said he left because he knew Freeman had called the cops.

Based on both Freeman and Vancamp’s reports, Vancamp was arrested for assault with a dangerous weapon and transported to Grady County Jail.

“We’ve had things like machetes and other martial arts style weapons that have been brought into the situations before,” Chickasha Interim Police Chief, Shanon McClain told KFOR. “I don’t have a specific recollection of a tomahawk, though.”