Texas university admission policy could be made permanent feature 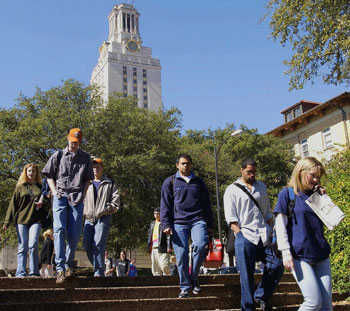 AUSTIN – Longhorn football doesn’t have much competition as a hot-button topic here, but one thing quickens pulses nearly as much – admission to the University of Texas at Austin.

Three-quarters of the freshman seats at UT Austin go automatically to Texas’ high school graduates under a policy forged by lawsuits and a decision by the U.S. Supreme Court.

Now, state lawmakers may be ready to make that policy, known as the top 10 percent rule, a permanent feature of UT enrollment by removing a provision that would have ended it in the 2017-18 school year.

“It would give us stability,” said UT President William Powers, arguing to fix the admissions standard during a recent hearing at the Capitol. “I think this provision has worked well.”

Those who don’t aspire to bleed burnt orange may think the distinction is an inside-baseball story, but they don’t know the score.

Even in a state where everything is bigger – and the UT student body hovers around 51,000 – there’s a limit to UT Austin’s capacity. The university received 38,785 applications for 7,287 places in last year’s entering class.

The top 10 percent rule – which admits students in the top 10 percent of each high school’s graduating class, sorted by their grades – is something of a misnomer. Because there are so many qualified applicants, automatic admission has only gone to the top 7 to 9 percent of graduates in recent years.

UT Austin fills the remaining 25 percent of the incoming class by making discretionary offers to students based on factors such as class rank, achievements and special accomplishments. That also helps to ensure diversity; the Supreme Court has ruled that diversity is desirable in higher education.

Many Texas parents, grandparents, students – and the lawmakers who represent them – are keenly interested in how the university’s 145-person admissions staff rules on test scores, grades and personal statements to fill the rest of the class.

Admission is such a big deal that a middle school in Abilene, 217 miles northwest of Austin, explains the rules of the 10 percent policy in detail on its website so that everyone knows what to shoot for if they want a coveted admission.

“It’s a big topic of conversation,” said Rep. John Zerwas, R-Richmond, author of the automatic admission bill voted out of committee on Wednesday.

UT spokesman Gary Susswein confirmed that the entire entering class would be filled with students from the top 10 percent of their classes if lawmakers changed the status quo.

“Without any change, the rules would expire in 2018, and there would be no cap on the number of automatically-admitted students who could enter UT Austin each fall,” he said.  “UT Austin could also lose the ability to select a portion of our freshman class based on a holistic review of applicants.”

Discretionary spots are such a hot ticket that politicos occasionally make headlines over efforts to game the admissions process. Critics also have questioned Powers’ influence over the discretionary admissions, as did a recent independent report.

But while some complain they’re excluded, advocates for minority students say guaranteed admission for those in the top 10 percent of their class ensures a more balanced student body.

In the current year, more than one-third of the students admitted under the top 10 policy were black or Latino, said Celina Moreno, attorney for the Mexican American Legal Defense and Educational Fund, compared to 19 percent outside the plan.

Nearly one-third of students within the plan came from households with median incomes of $60,000 or less, compared to 12 percent of students outside the plan.

“The diversity comes with the added benefit of higher academic standards,” said Moreno. “Students who performed lower on standardized test scores but were admitted under a top-10 plan are shown to have higher retention rates, higher GPAs and the percentage of graduates is higher.”

The policy has its roots in a 2008 legal challenge by a pair of prospective white students who were denied admission. They argued that race-conscious enrollment is unconstitutional – a case that ultimately went to the U.S. Supreme Court.

The court’s decision, and a later ruling by a federal appeals court, allowed for the 10 percent policy. However, the plan carried an expiration date to give lawmakers a chance to review and reassess, said Susswein.