Should players get a piece of NCAA tournament profits? 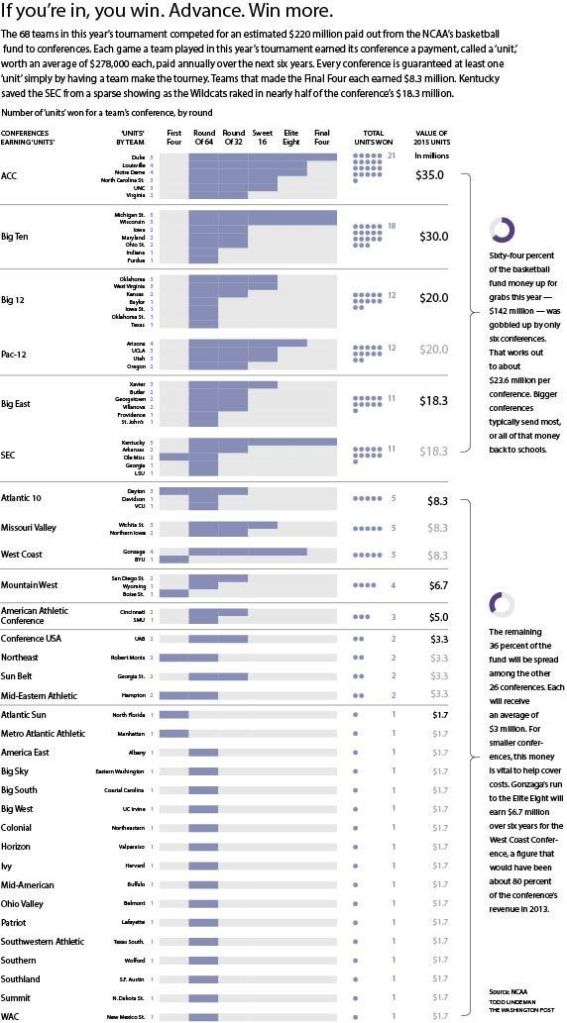 INDIANAPOLIS _Willie Cauley-Stein knows the NCAA tournament makes a lot of money for a lot of people. Cauley-Stein also knows how much of that money will get paid to him and his Kentucky teammates.

Cauley-Stein has some strongly held opinions about the ongoing debate over amateurism in big-money college sports, opinions so strong that when the subject came up during a news conference Friday, the 21-year-old actually stopped himself from answering out of fear his emotions would overcome him.

The number, in terms of television revenue the NCAA makes from this tournament, is more than $700 million. The NCAA will use some of that money to put on the 88 championships in the other collegiate sports that don’t generate nearly as much money as men’s basketball. It will send a lot of money directly to schools. And a big chunk of it — nearly $220 million — will go to athletic conferences based on how Cauley-Stein, his teammates and the rest of the players on the 68 tournament teams fared.

In the annual competition for the money in the NCAA’s “basketball fund” — doled out via a complicated formula that rewards conferences whose teams play the most tournament games — the big conferences, as always, made the most. The ACC earned an estimated $35 million, while the Big Ten, with its two Final Four schools, won $30 million. The Southeastern Conference, thanks mostly to Kentucky, will make $18.3 million. And all the small conferences whose teams came and went quickly — the Big Sky, the Big South, the Big West and more — will take home $1.7 million each.

Each team that made this year’s Final Four earned its conference an estimated $8.3 million. When players from the Final Four teams were told this fact this past weekend and were asked whether they should get paid some of that money, they offered a diverse array of responses. Their answers showed that while some of the athletes starring at powerhouse college programs believe scholarships are compensation enough, others are less content with the status quo.

Cauley-Stein’s teammates, Andrew Harrison and Trey Lyles, were less bothered by the numbers.

Harrison: “I’m just here to go to school, have fun and play basketball.”

Lyles: “I just focus on school and basketball.”

Duke stars Jahlil Okafor and Justise Winslow reacted similarly to questions about millions earned and where the money should go.

“I don’t have any comment on that,” Okafor said. “I’ve had a great year so far with everything, and I’m comfortable with that.”

Duke guard Matt Jones was surprised to hear the exact amount of money the ACC would get thanks to his team’s success.

“Wow,” Jones said, his eyes widening. When asked whether he and his teammates should get any of that money, Jones said maybe but then blamed himself for feeling that way.

“The selfish side of me would say yes,” he said. “But at the same time . . . I just try to stay in my lane. Whatever happens, happens. But the selfish part of me definitely would want a little part of that money, but at the same time, I know that I can’t really control that.”

Michigan State forward Gavin Schilling said it wasn’t up to him but added: “I wouldn’t mind seeing some of that money.”

When told his Badgers had made $8.3 million for the Big Ten, Wisconsin forward Sam Dekker said: “That’s a lot of money.” Dekker answered ambivalently to a question about paying players.

Kentucky Coach John Calipari was one of the NCAA’s biggest defenders this weekend. He pointed out the changes that have come in the past year — structural shifts that will allow schools such as Kentucky and the others in the “Power Five” conferences to offer stipends to players of up to $5,000.

“I think the NCAA is moving in the right direction,” Calipari said. “It’s a slow-moving boat. But for 40 years, this is the way it is, we’re not changing. Now they’ve been forced to move in the direction of these young people. I think they’ve done a pretty good job here over the last year.”

Calipari doesn’t think the change should stop with stipends, and he suggested that the NCAA cover disability insurance for players and offer some financial incentive to keep underclassmen who are considering leaving for the NBA.

In the midst of his answer, Calipari commended another recent change.

“We changed the food policy. We can now feed our kids,” he said, referring to an NCAA rule change that allowed colleges to provide unlimited meals to their athletes.

Then Calipari — who made $6.5 million this season — made a joke: “But we’re not going to make them fat.”