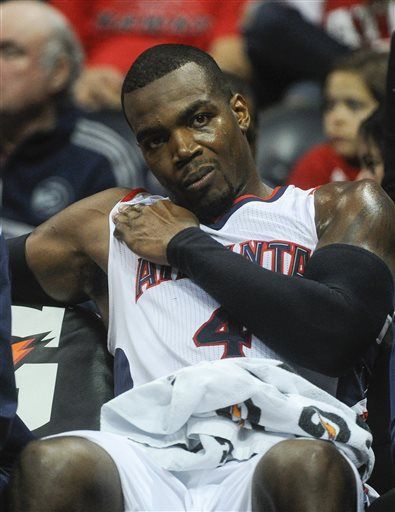 Hawks’ Millsap to miss at least 2 games with shoulder injury

The Atlanta Hawks can live with that diagnosis, as long as their All-Star forward is healthy for the playoffs.

X-rays were negative, the Hawks announced Monday, with an MRI showing that Millsap sprained and bruised his shoulder against Brooklyn this past weekend.

“We’re pretty happy,” coach Mike Budenholzer said after practice. “When someone has an MRI or gets banged like that, you’re worried that something more might be revealed.”

Millsap will definitely miss Tuesday’s home game against Phoenix and Wednesday’s game at Brooklyn. The team said his status will be updated when appropriate, but the main focus will be on making sure he’s ready when the playoffs begin in less than two weeks.

The Hawks (57-19) have already sealed the top seed in the Eastern Conference and tied a franchise record for victories.

“The good thing for us, at least, is that we already clinched the No. 1 spot and everything,” center Al Horford said. “The priority is to get Paul healthy. There’s no need for him to play through pain with an injury like that. That’s the mentality, that he’s healthy and he comes back and he’s ready to go.”

Millsap was injured Saturday in the first half of a 131-99 victory over the Nets when he collided with Earl Clark.

It was the latest in a string of could-have-been-worse injuries to strike the Hawks.

Mike Scott just returned after missing 11 games with a sprained toe, playing a little more than nine minutes against Brooklyn. Backup point guard Dennis Schroeder, who went out a week ago against Milwaukee with his own toe injury, practiced Monday and is expected to return against the Suns.

Thabo Sefolosha, who missed 23 games with a calf injury, has been back for almost two weeks and feels as though he’s finally getting up to speed.

“It feels good to be back out on the court before the playoffs, get back into the rhythm, and honestly, I’m feeling pretty good,” Sefolosha said. “I think I’ve got my wind back, and my legs are starting to come back also.”

Budenholzer wouldn’t say who will start in Millsap’s place against the Suns. But the coach won’t keep his other starters in bubble wrap until the playoffs begin April 18.

“You can’t just not play,” he said. “You play hard and you do what the game calls for. Things happen. If you’re worried about it or you’re thinking about it, then you’re probably more likely to have something happen.”