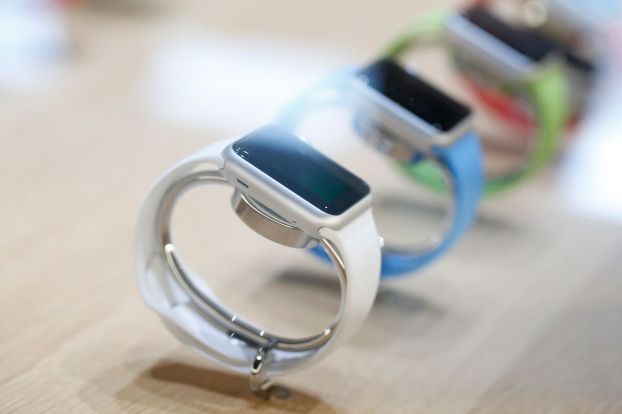 SAN FRANCISCO — When it comes to buying the Apple Watch, it’s time to think different.

Angela Ahrendts, Apple’s sales chief, wants to scrap the company’s tradition of having customers wait in line, sometimes for days, to get their hands on the latest gadget. Apple has instructed its sales force to prod shoppers to the company’s website to purchase the new smartwatch, which can be pre-ordered Friday.

“The days of waiting in line and crossing fingers for a product are over for our customers,” according to a memo to Apple sales staff. “This is a significant change in mindset and we need your help to make it happen.” Business Insider earlier reported on the memo.

The approach is the first indication of where Ahrendts is taking the Apple buying experience since joining the company about a year ago from British luxury retailer Burberry Group. While the Apple watch starts as low as $349, its top-end $17,000 gold version pushes the Cupertino, California-based company into a new, lofty realm.

“This is not simply a consumer-electronics good — it’s a luxury good,” J.P. Gownder, an analyst with Forrester Research, said. “There are a lot of good reasons to” to change “but there is that danger that it maybe a little bit, literally, buzz killing.”

Introductions of new iPhones also are sold online and usually prompt long waits at stores worldwide, with shoppers lining up days in advance. While many buyers walk away disappointed, the perceived scarcity helps fuel buzz for the devices.

Encouraging Apple Watch shoppers to make appointments may help the company explain the complicated pricing and options and sell customers on why they would really want it, Gownder said. The watch is being offered in two sizes and three styles as well as different options for bands. The iPhone 6, for example, has three memory and three color options.

The watch — which aims to provide new ways to communicate, track fitness goals and give directions, among other things — is the first new gadget from Apple in five years.

The visibility may help bring greater attention to the total market for wearable devices, such as offerings from Samsung Electronics. The global market for all smartwatches may rise to 28.1 million units this year from 4.6 million, according to researcher Strategy Analytics. Sales of the Apple Watch may reach almost 14 million in the fiscal year through September, according to the average estimate of five analysts surveyed by Bloomberg.

The device will test whether Apple can create new products that generate as much excitement as those under co-founder Steve Jobs, who died in 2011. Optimism for Apple’s new items under Chief Executive Tim Cook has pushed company shares to record highs this year.

“Part of the problem that Samsung and others have had in the market has so far been: ‘What is making me want to have this device? Essentially I feel like my phone can do what it can do, why do I need this?'” Gownder said. “Being able to articulate a vision of why this is different is very important and Apple, because of this kind of one-on-one approach, will have the best chance of telling people.”

Medical waste containers are stored in preparation for Scott County residents that are looking to exchange used needles at the... read more