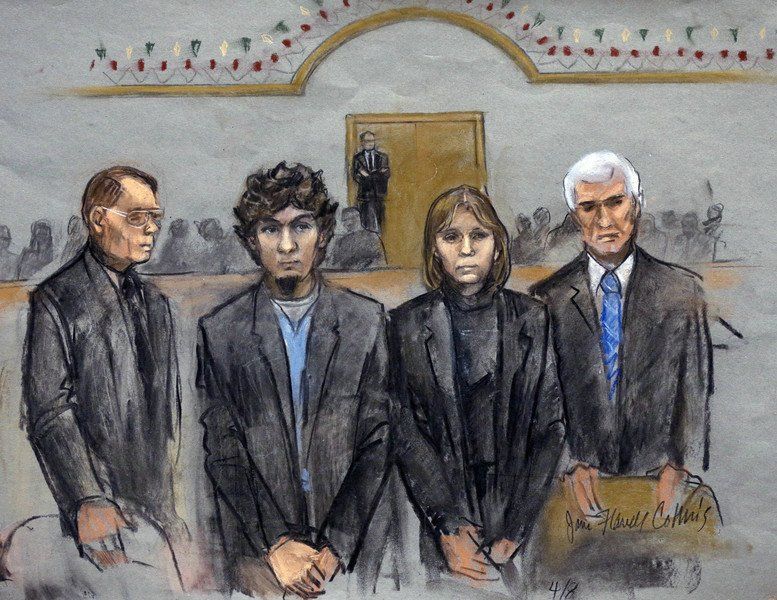 “It’s obviously no surprise that he was guilty,” said Salem resident Beth O’Grady. However, she’s not sure that Tsarnaev’s sentencing, possibly the death penalty, will bring any closure or peace to the families of the victims or other the hundreds of those injured in the blasts.

O’Grady had just finished the race and was still lingering near the finish line when the first bomb went off. She escaped harm, but couldn’t help thinking that the Tsarnaev brothers were probably setting the bomb as she crossed the line.

“I was at the treadmill at lunch today watching the TV [of the verdict] and I was drawn back to that moment, hearing those bombs go off,” she said.

“I’m glad that he was found guilty,” said Salem Fire Capt. Dennis Levasseur. “Probably the biggest thing is that now that we’re getting this over with, I think people can move on whether they were victims or friends of victims.”

He said it might easier now for people to focus on healing.

Levasseur and his wife were spectators near the Marathon finish line. When the bombs exploded they helped elderly bystanders get off the stands to safety and then moved into the chaotic scene at the finish line to help. Levasseur later received a commendation for his efforts while not on duty.

“As much as you saw the worst in humanity that day, I think you saw the best in humanity as well,” he said. “I try not to dwell on it, being a firefighter for 28 years you see a lot of things, deal with it and move on.”

For those families who did experience great loss that day, they expressed thanks for one aspect of the ordeal to come to a conclusion.

“While today’s verdict can never bring Sean back, we are thankful that Dzhokhar Tsarnaev will be held accountable for the evil that he brought to so many families. … The strength and bond that everyone has shown during these last two years proves that if these terrorists thought that they would somehow strike fear in the hearts of people, they monumentally failed,” the statement said.