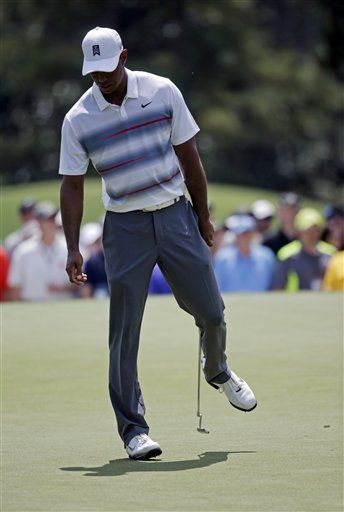 Woods making pars at the Masters, which is definite progress

Tiger Woods is at even par at the Masters.

That’s actually a big improvement over the last time he attempted to play tournament golf.

Woods walked off the course at Torrey Pines on Feb. 5, his game a total mess. He said he wouldn’t compete again until he saw signs of improvement during his practice sessions, which led him to announce late last week that he would play at Augusta National.

Some questioned if Woods was merely deceiving himself, but it was clear during practice rounds this week that he was at least striking the ball a lot better than before, even though there are still plenty of doubts that he’s ready to win his 15th major title.

Woods went with a 3-wood off the first tee and drove his ball right of a bunker along the right side of the fairway. He wound up making a bogey. Then he followed it up with a birdie at the par-5 second hole and a par at the third.

Considering where he was before, that’s progress.

Chasing a career Grand Slam, Rory McIlroy was off to a sluggish start at the Masters.

At the 11th hole Thursday, a sloppy chip from just off the green led to his second bogey, prompting McIlroy to swipe his club angrily. He had only one birdie, leaving him 1 over for the round as he headed through Amen Corner.

Meanwhile, the lefties are climbing the leaderboard.

Defending champion Bubba Watson was at 2 under. So was three-time Masters winner Phil Mickelson.

The leader in the clubhouse remained Charley Hoffman with a 5-under 67, though there was company at the top. Justin Rose birdied both par 5s on the back side to push his score to 5 under with three holes to play in the opening round.

What’s all that barking at Augusta National? Those would actually be cheers for Russell Henley, who turned in a 4-under 68 Thursday and was one shot behind early clubhouse leader Charley Hoffman.

The 25-year-old Henley is a native of Macon, Georgia, about a two-hour drive from Augusta. He played his college golf at the University of Georgia, where fans of the Bulldogs are known for barking and shouting “How ‘Bout Them Dawgs!”

Henley gave them plenty to cheer about with a round that included five birdies and only one slip-up, a bogey at the 11th.

This is the third Masters appearance for Henley, who missed the cut two years ago and finished tied for 31st in 2014. This was the first time he’s broken 70 at Augusta National.

The Bulldogs are well represented in the first major of the year, with Henley joined by five other alums, including defending champion Bubba Watson. No other school had more than three players in the field.

Henley said he wasn’t quite as nervous as the last two years.

“I just had a ball today. It’s fun to shoot under par at Augusta,” he said.

Charley Hoffman had quite a day at the Masters.

Not only did he shoot a 5-under 67 to grab the early lead Thursday, he managed to snag a couple of valuable autographs.

While Hoffman was warming up to play in the first group of the tournament, he spotted Jack Nicklaus and Arnold Palmer hitting balls on the range. Those two, of course, strike the ceremonial opening tee shots along with Gary Player.

“That was pretty cool,” Hoffman said. “I was sort of scared of them. ‘Should I ask them? Should I not ask them?'”

He mustered up the courage and got them to sign a couple of flags, which Hoffman plans to auction off to benefit some of his favorite charities.

“My mind was not on golf early on,” he said. “I was thinking of those guys.”

Maybe that helped Hoffman relax. Then he birdied the second and third holes, which calmed his nerves even more.

“I was ready to go,” Hoffman said.

Playing the Masters for the first time since his debut in 2011, Hoffman shot a 5-under 67 to become the leader in the clubhouse. He was in the first group of the day with Brian Harman and got off to a good start, making birdies on the three of the first five holes.

Hoffman closed even better with an eagle at the par-5 15th, a birdie at No. 16 and a 5-foot birdie putt at the 18th for his lowest round ever in a major.

At the moment, he’s two shots clear of the field. Justin Rose and Bill Haas are both 3 under.

When he played the Masters four years ago, Hoffman finished tied for 27th.

Rory McIlroy got off to a bit of a shaky start Thursday at the Masters, knocking his ball into a creek that runs well off the left side of the par-5 second hole.

After taking a drop on the pine straw, McIlroy lined his next shot between a couple of trees, back into fairway. A nifty wedge left him with a short putt to save par, about as good a result as he could hope for after that errant shot.

Charley Hoffman, playing in the first group of the day, made an eagle at the 15th and a birdie on the 16th to claim the early lead at 4 under.

Rory McIlroy has teed off in the Masters with history in his grasp.

The 25-year-old from Northern Ireland is three-quarters of the way to a career Grand Slam, with only the Masters missing from his resume.

If McIlroy can win at Augusta National, he’ll follow Jack Nicklaus, Tiger Woods, Gary Player, Ben Hogan and Gene Sarazen as the only players to win all of golf’s biggest events in the modern era.

McIlroy is the clear favorite after closing 2014 with victories at the British Open and the PGA Championship. At the Masters, he is best remembered for his closing-round collapse in 2011, when he squandered a four-shot lead by shooting 80.

“A place in history is what’s at stake,” said McIlroy, who was playing Thursday with three-time Masters champion Phil Mickelson and Ryan Moore. “The sooner I get it out of the way, the better.”

Ben Crenshaw is playing his 44th and final Masters without his usual caddie on the bag.

Carl Jackson had hoped to go out with Crenshaw one more time, but sore ribs forced the 67-year-old looper to turn the duties over to his brother Bud, one of Augusta National’s full-time club caddies.

“I’m injured,” said Carl Jackson, who came out to watch Crenshaw on the putting green Thursday.

Jackson, who used to work at Augusta National, was on the bag for Crenshaw’s Masters victories in 1984 and 1995. The golfer continued to use him even after the club dropped its requirement that all players must use one of the club’s caddies in the tournament.

With Jackson out, his younger brother was the natural replacement. The 58-year-old has worked at Augusta National for 49 seasons and is one of the club’s top caddies, though this is only the second time he’s taken part in the Masters.

Asked if he was nervous, Bud Jackson said, “Noooo! I do this every day.”

The Jackson family is an institution at Augusta National. Two other brothers also caddied in the Masters: Bill Jackson was on the bag when Ed Sneed lost to Fuzzy Zoeller in a playoff, while Austin Jackson once worked with Arnold Palmer.

Too bad cameras aren’t allowed at Augusta National. Charley Hoffman’s family and friends would love to snap a quick picture of the Masters leaderboard.

Hoffman is the very early leader on a warm, sunny Thursday morning, making birdies at the second and third holes to push his score to 2 under. He’s playing the first group with Brian Harman, who parred the first three holes.

Of course, it’s a little early to start measuring Hoffman for a green jacket.

Undoubtedly, some players haven’t even woken up yet.

Jack Nicklaus, Gary Player and Arnold Palmer thrilled the patrons who crowded around the first tee shortly after sunrise. They even drew some of the players who’ll be competing for real, including defending champion Bubba Watson, Rickie Fowler and Keegan Bradley.

“Don’t fan it,” Palmer jokingly told himself before hitting his shot.

“I don’t think he’s kidding,” Nicklaus added. “He said exactly the same thing to me.”

Player said he appreciated the players who came out to watch him hit.

“It shows they have respect for the game,” he said.

Not long after the Big Three left the tee, the tournament began for real. Charley Hoffman and Brian Harman were the first group to hit the course.

Shezoy Bleary, center, a suspect in the stabbing of Indiana Pacers forward Chris Copeland, his girlfriend and another woman early... read more