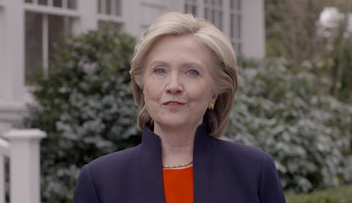 Hillary Rodham Clinton entered the presidential race on Sunday, saying she wants to fight for the economic futures of regular people and ending years of speculation about whether she would redeem the disappointment of her failed 2008 attempt to become the country’s first female commander in chief.

“I’m running for president. Everyday Americans need a champion, and I want to be that champion,” Clinton said in a Twitter message.

An accompanying video features a diverse assortment of Americans talking about their hopes and aspirations as they undertake a new challenge. Clinton does not even show up until the video has run for well more than a minute. When she does, it’s with a folksy declaration that she, too, is “getting ready to do something.”

“Americans have fought their way back from tough economic times. But the deck is still stacked in favor of those at the top,” Clinton says. “I’m hitting the road to earn your vote, because it’s your time. And I hope you’ll join me on this journey.”

The studied understatement was intentional, an attempt to answer critics who wrote off her 2008 campaign as a nervy juggernaut of ambition and guile. This time, Clinton seems to be saying, the campaign is about voters and not about her.

That begins to touch on a campaign rationale — too many people have been dealt bad hands by the still-uncertain economy, but I’m on your side to help fix it — but leaves for later any detailed assessment of her policy prescriptions on the economy, other domestic issues or foreign policy.

The video features real people, as opposed to actors, and includes an obvious appeal to both the Democratic working-class base and groups that formed the core of President Obama’s coalition — including the young, minorities and gays. Women outnumber men, men hold hands, and one Clinton supporter speaks in Spanish.

One person it does not feature: Bill Clinton. The former president is neither shown nor mentioned. He appears in photos on the campaign website, but it was clear that his presence and role were taking a back seat to his wife’s aspirations.

Hillary Clinton has resigned from the board of the Clinton Foundation, the foundation said late Sunday. The vast charitable operation has been the mainstay of Bill Clinton’s post-presidential career and has come under renewed scrutiny for accepting foreign donations while Hillary Clinton was secretary of state.

The newly declared candidate will hold two days of small events in Iowa this week, beginning at a community college in the eastern town of Monticello on Tuesday.

Clinton is a prohibitive favorite among Democrats and also polls far ahead of any potential Republican rival now on the scene.

More celebrity than politician, Clinton is almost universally known. Nearly every American already has an opinion of her, whether good or bad.

Many of the factors that contributed to her downfall in 2008 are still present, including Clinton’s own limitations as a retail campaigner. Always more comfortable in the wonk trenches than on the campaign rope line, Clinton is starting her 2016 campaign with smaller events intended to play to her strengths as an advocate. She had already been zinging congressional Republicans on Twitter while telling partisan audiences that she has experience working across party lines in Washington.

The “to be determined” reference is now decided: a second attempt at the White House. Clinton has been running a shadow campaign for months, attacking Republicans and refining a Democratic-base-friendly message heavy on themes of economic fairness and an equal shot at middle-class success for all.

Clinton changed her Twitter profile Sunday, replacing the now-iconic picture of her checking e-mail aboard a military transport plane with a cheery, campaign-ready picture and her new logo, an “H” with a forward arrow. She told supporters that the account will now be managed by her campaign but that she will also continue to send her own messages.

No high-level primary opposition is yet on the horizon. On the GOP side, Clinton faces a motley assortment of more than a dozen declared or likely opponents eager to define themselves as the candidate who could defeat her.

Sunday’s entry finally makes official what had been evident for months, as Clinton weighed in on political and policy debates via Twitter and in speeches while refining a campaign message focused on expanding middle-class economic opportunities.

The long, gradual buildup to Clinton’s formal entry into the race was by design — and was not without detractors among Democrats eager to get into a political mix that has been dominated by the wide field of potential Republican candidates. Some leading Democrats were dismayed by the slow, unsteady response to the flap over Clinton’s use of a private e-mail system when she was secretary of state, and they blamed the fact that she had no full-on in-house response operation.

Clinton herself kept her foot on the brake, advisers said, insisting there was plenty of time for hand-to-hand combat and many advantages to remaining out of the direct fray. She is expected to delay large rallies and arena speeches for at least several more weeks, and to spread such events between the more intimate campaign appearances once she does begin doing them.

She will hold a large rally toward the end of May, which will mark an unofficial turning point after a period of small-scale events patterned after the successful “listening tour” Clinton conducted when running for Senate in New York as an outsider 15 years ago.

The scaled-down approach is a direct response to the poor start Clinton made when she began her 2008 campaign, when she was kept at a remove from voters. Critics said the campaign smacked of entitlement.

Many of Clinton’s strongest backers now say the early months of that campaign muffled Clinton’s best qualities as a listener and problem-solver.

“Look, Hillary Clinton is the most famous woman in the world. There is a lot of intimidation that comes with that,” both for people meeting Clinton and the far greater number of people watching and evaluating those interactions from afar, he said.

“Anything she can do to blunt that intimidation is going to be helpful to her,” Burton said.

A chief reason for declaring now: money. Clinton needs to begin ramping up her finance operation to pay for the extensive political networks she has begun building in Iowa and the three other early-voting states, advertising and what outside advisers describe as an aggressive online and on-the-ground outreach effort aimed at new and infrequent voters.

Clinton’s Web site includes a link for donations, and behind the scenes her finance operation began reaching out to potential donors for a quick infusion of campaign cash. Online donors have a choice to donate between $3 and $250, with the option of filling in one’s own amount. The campaign appears to be accepting donations beyond the $2,700 limit for individuals to give for the primaries — the page notes that any money over that will be for use in the general election.

Clinton’s shadow campaign has been operating for weeks on what aides somewhat ruefully call a volunteer basis, with paychecks expected only after Clinton officially becomes a candidate.

Aides and friends were mum ahead of the launch about how Clinton would answer the deceptively simple question of why she should be president.

A longtime friend and adviser, Burns Strider, said his own answer to that question lies in her personal history.

“She fixes problems; been doing it her whole life,” said Strider, an adviser to the pro-Clinton research group Correct the Record. “I’ve heard folks complain she’s not a politician. That’s a good thing — we have plenty. We need a leader and someone who can fix problems.”

She has probably the best chance in history of becoming the first female U.S. president. That potential is woven throughout her emerging platform, with an emphasis on the advocacy for women and girls that has been the backbone of her professional life.

“Don’t you someday want to see a woman president of the United States?” Clinton teasingly asked an audience of Democratic women last month.

A chief challenge of Clinton’s early campaign will be to reintroduce or “rebrand” the candidate for a second presidential run. Advisers, including outside corporate admakers, have been at work on that project for months.

The bar for success this time is high, set partly by the difficulties of one party trying to hold the White House for three consecutive terms and partly by Clinton herself. Her second attempt was being measured against the first long before she made her 2016 bid official.