Warrior pose: Yoga catching on as therapy for veterans’ PTSD 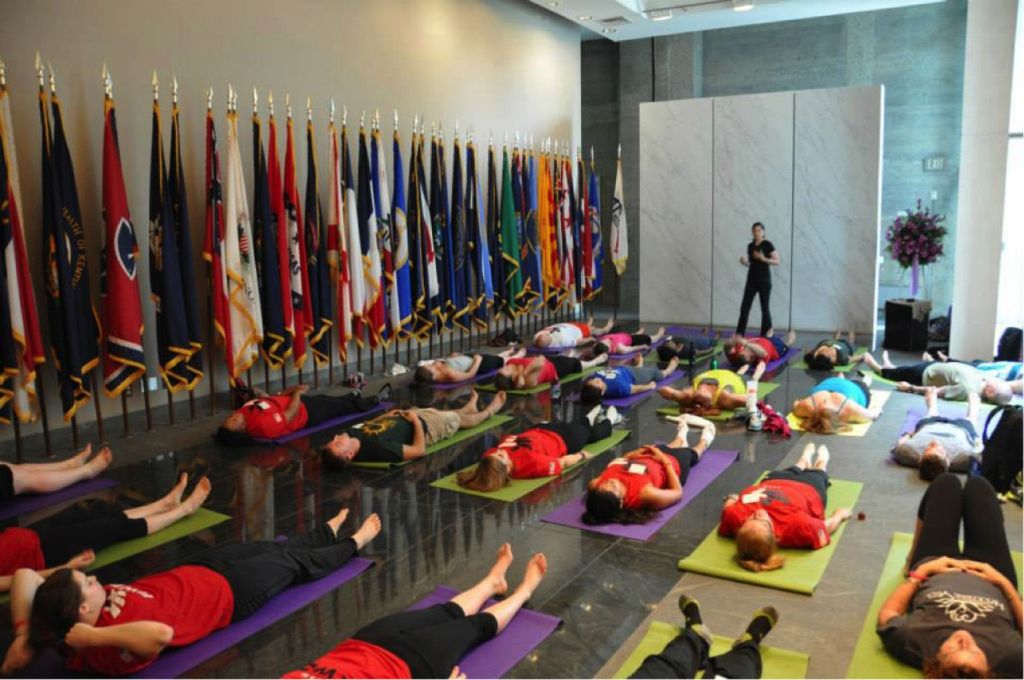 WASHINGTON – Army Lt. Col. John Thurman lost 26 co-workers in the Sept. 11, 2001, attack on the Pentagon. He endured severe smoke inhalation while trapped in the building for 25 minutes. He spent a week in the hospital recovering.

But when Thurman started doing yoga, it “made all the difference in the world in my ability to deal with the stress and my injury from that day.”

He fell so in love with his time on the mat – with yoga’s traditional asanas, or poses, and deep breathing – that in 2013 he attended teacher training. He left his job at the Pentagon and is now teaching yoga full time, including at the Pentagon Athletic Center, where his classes are packed.

This past weekend, Thurman and 17 yoga teachers from five states gathered at Yoga Heights in Washington for yoga for PTSD and trauma training. The studio’s workshops were specifically designed to heal and help veterans suffering from both the emotional and physical wounds of war.

Of the 2.3 million American veterans who returned from the wars in Iraq and Afghanistan, more than 20 percent suffer from post-traumatic stress disorder, which often includes anxiety, depression and hypervigilance, which means they feel always on guard.

Experts say treatment for PTSD with painkillers, antidepressants and psychotherapy often have mixed results. The Veterans Health Administration has launched four pilot programs – including one in Richmond, Virginia – offering yoga, acupuncture, Qigong, guided imagery and equine therapies, part of an effort to reduce the dependence of tens of thousands on opiate painkillers.

While doctors say the highly addictive drugs can help in the short term, they also can be harmful and often require another round of prescription pills to counteract side effects, which can include insomnia, constipation, bone pain, anxiety and depression.

The alternative therapy programs mark a dramatic departure in the treatment offered to troops returning from the wars in Iraq and Afghanistan.

Sessions at the D.C. studio had titles such as “The Nervous System and Using Yoga as a Therapeutic Methodology,” “Understanding Veteran and Military Culture” and “Why Yoga for Trauma?”

Sitting on yoga mats and bolsters, teachers who attended also learned about the culture of veterans – they really work great as a team – and about what their specific needs might be from their practice.

“If you can get a vet to sleep through the night when they have PTSD, then you are so far along in the healing process,” said Rob Schware, executive director of the Give Back Yoga Foundation, a nonprofit group that worked with Mindful Yoga Therapy to host the training.

Jess Pierno’s job before she opened Yoga Heights with Amy Rizzotto, also a yoga teacher, was in the Office of the Secretary of Defense, where she started a lunchtime weekly yoga and meditation class for anyone who worked in the building.

“The yoga instructors who complete this training will be better equipped to teach students who have experienced trauma by knowing how to mindfully adapt a typical yoga class setting and sequence to be more welcoming, comfortable and beneficial,” Pierno said. “Yoga is a very important healing tool.”

In the past, the ancient Indian practice was more typically associated with blissed-out yogis at an ashram, not former service members looking for inner peace.

But yoga is being increasingly embraced by the Department of Veterans Affairs and the military looking to wean veterans off addictive painkillers and offer them alternative treatments for pain.

Yoga practices are designed to help calm the nervous system, she said.

In Milwaukee, for example, VA rolled out an expanded yoga program for veterans in January. Warrior Stance is a free wellness program for all veterans. One session drew 25 veterans, double the number expected, the office told local media.

In a recent study published in the Journal of Traumatic Stress, researchers say they found scientific support that yoga can decrease stress and help move people away from negative and traumatic thoughts. The study was also the first of its kind to provide scientific support for the benefits of yoga’s breathing techniques for PTSD patients.

Thurman said he hopes VA and the Defense Department will boost their programs and offer even more yoga to veterans.

“Everyone can use more yoga,” he said.