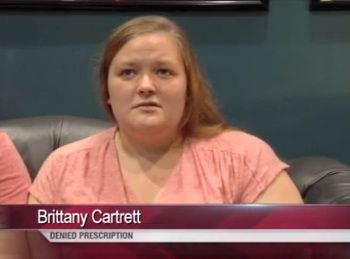 A Georgia woman claims that a Walmart pharmacist refused to fill her prescription for a medication to treat a miscarriage. That medicine is also used to trigger abortions.

Brittany Cartrett was recently told by her doctor that she had miscarried while pregnant with her second child while five or six weeks along. She opted for medicine instead of having the fetus surgically removed.

“We decided to go the less invasive route and choose a medicine that I could take at home to help miscarry naturally, especially since my body wants to hold on to the little miracle,” Cartrett shared via Facebook.

Cartrett’s doctor’s office contacted a nearby Milledgeville, Georgia, Walmart pharmacy to fill the prescription for Misoprostol, but the request was denied without any explanation.

Used in the method known as abortion by pill, Misoprostol is described as “a prostaglandin that causes uterine contractions” that is often taken in conjunction with Mifeprex to end pregnancies between six and 10 weeks along.

Following the refusal of the medication, Cartrett addressed the matter with local Walmart pharmacy staff and district staff members after she was told that her need for the prescription medication wasn’t justified.

“I tell her my reasons for needing it, and she says ‘Well, I don’t feel like there is a reason why you would need it, so we refused to fill it,’” Cartrett said of the encounter. “I said ‘Well ma’am, it’s not your job to know what I need or don’t need. It’s your job to fill a prescription.’”

Walmart pharmacist on duty, Sandip Patel, told area ABC affiliate WGXA that he was aware of what occurred regarding Cartrett’s prescription and said that pharmacists have the ability to turn down prescriptions at their discretion, despite the urging of doctors or patients.

Walmart corporate office representative Brian Nick supported Patel’s statement, stating “Our pharmacists fill prescriptions on a case by case basis every day in our stores throughout the country and we encourage them to exercise their professional judgement in doing so,” the affiliate reported.

Cartrett was able to get the prescription filled through another pharmacy, but she said sharing her story via social media has brought an outpouring of support.

“It’s very frustrating, because who is the pharmacist to make that decision?” she told WGXA. “They do a residency just like a doctor does, but I’m not going to see that pharmacist, I’m going to see a doctor and if it’s because of that due to the conscience clause I think its called, then what other decisions are they making based on our health and our needs by not giving a prescription to someone who may or may not need it?”

According to Pharmacy Times, The Georgia Board of Pharmacy maintains its rules “protect a pharmacist who refuses to fill a prescription.” As the rule states, “It shall not be considered unprofessional conduct for any pharmacist to refuse to fill any prescription based on his/her professional judgment or ethical or moral beliefs.”