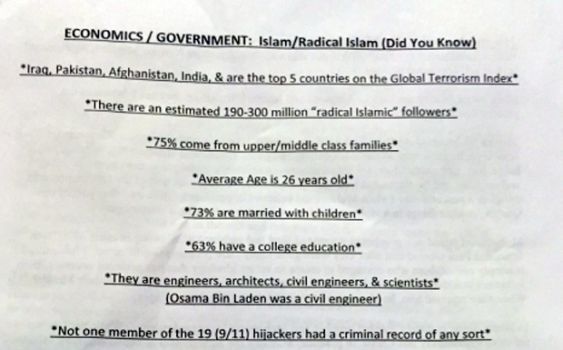 In addition to labeling Muhammad a “false prophet,” the material distributed to a class of Foster students on March 27 refers to Islam as an “ideology of war” that forces its beliefs “on the world through propaganda, subversion, and even physical force when it is deemed necessary, one area of the world at a time.”

After learning about the handout, Mustafaa Carroll, executive director of the Houston Council On American-Islamic Relations, asked the Lamar Consolidated Independent School District to “send a message that our schools must never be incubators of hate.”

On Tuesday night, a district spokesman told reporters that the teacher, identified by the Houston Chronicle as Herby Woolverton, resigned on April 8.

“We’re disappointed to learn one teacher made independent changes to a lesson plan, resulting in information being given that didn’t follow subject matter, or a state and local curriculum plans,” the Lamar CISD said in a statement issued before Woolverton’s resignation. “Arbitrary curriculum decisions, which are clearly outside our guidelines, won’t be tolerated.”

Photos of the handout can be viewed here.