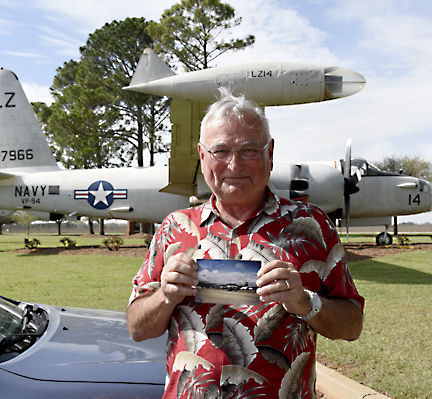 AMERICUS — Bob Kenyon from Ohio had the opportunity to spend some time on the campus of South Georgia Technical College (SGTC) in Americus recently and reconnect with the airplane that he flew in as a young serviceman in the Navy over 53 years earlier.

Kenyon joined the navy at age 17 after graduating from high school. He spent 1959 to 1962 as a member of a Navy crew that flew in a Lockheed P2V-7 Neptune out of Brunswick Naval Air Station in Maine. He had often wondered what had happened to the plane that he had flown in.

His brother-in-law, through research, found that the plane had been decommissioned in the 1960s and was thought to now be on the grounds of SGTC in Americus. Kenyon put the information in the back of his mind and hoped that one day he would be able to actually make the trip and determine if the SGTC plane was the same one he had flown.

This year Kenyon was planning a trip to Nashville, Tenn., and had scheduled a stop in Valdosta to visit his wife’s relatives. He looked at the map and found that it would only be a slight detour to travel to SGTC after the stop in Valdosta.

He made several calls to the college and sent eemails to SGTC aviation maintenance instructor Victoria Herron to see if she could confirm that the plane was the same one.  Herron confirmed that the tail number of the Neptune on display was 147966, which was the identical number of the plane that Kenyon had flown earlier.

“I cannot believe that I am here and that is my plane,” said Kenyon when he and his wife Linda arrived on the SGTC campus. “This brings back a lot of memories. It looks different than I remember it, but it has been over 50 years ago when we were flying over the ocean looking for Russian submarines.”

Now the War II-era Navy Lockheed P2V-7 Neptune plane sits on the front lawn beside the main entrance into the SGTC campus. The Navy Lockheed P2V-7 was the last version of this particular plane made and was the only one with a bubble canopy over the cockpit. It was flown into the campus over 25 years ago but since that time it has served as a static display that SGTC aviation maintenance students get to work on when practicing routine maintenance skills.

The P2V-7 Neptune is unique in that it has two J-36 jet engines as well as two reciprocating engines with propellers. The plane was not pressurized so it always flew below 10,000 feet. In fact, Kenyon, remembered that most of the time they were only 500 to 1,000 feet above the ocean.

“We never wore a parachute,” he said.

When Kenyon first arrived, he went over to the plane and pointed at a small window near the rear of the plane.

“Here is where I sat most of the time. There was no air conditioning back then so in the summer we would open the window to get a breeze while we were looking for Russian submarines and Trawlers,” he said.

Kenyon walked around the plane and reminisced about his job duties in the Navy.

“My job was to keep this plane looking good. I was responsible for keeping all the metal, glass, propellers and tires maintained properly before we got into the air. Once in the air, I was assigned to look for and take pictures of the Russian vessels.”