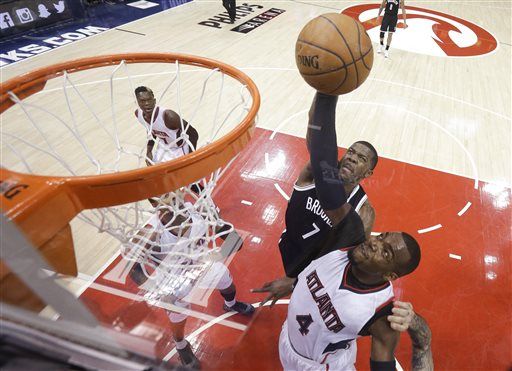 ATLANTA (AP) — Paul Millsap answered all those questions about his shoulder. Al Horford didn’t let a dislocated finger slow him down.

As for the Hawks, they’ve yet to show the form that carried them to the top of the Eastern Conference.

No. 1-seeded Atlanta again survived a tougher-than-expected test from the Brooklyn Nets, holding on for a 96-91 victory and a 2-0 lead in their playoff series Wednesday night.

Millsap, who missed five games near the end of the season with a sprained right shoulder, ditched a pad that he felt restricted his shooting motion. He responded by hitting 7 of 11 shots and finished with 19 points.

Horford also looked fine, scoring 14 points while leading the Hawks with 13 rebounds and seven assists. He did it all with his right hand taped, after dislocating his pinky finger in Game 1.

“Once the game started, I was good,” Horford said.

Kyle Korver chipped in with 17 points, knocking down three shots beyond the arc. But overall, the Hawks made only 39 percent from the field.

“We feel fortunate that we made just enough plays, just enough stops,” said Atlanta’s Mike Budenholzer, recognized before the game for winning the NBA Coach of the Year award.

Squandering an early 12-point lead, the Hawks spent much of the game struggling to put away the No. 8 seed.

It went down to the wire. Deron Williams missed an open 15-foot jumper that would’ve tied it with about 10 seconds to go. Korver rebounded, was fouled and made two free throws to clinch Atlanta’s win.

The best-of-seven series shifts to Brooklyn for the next two contests. Game 3 is Saturday.

Jarrett Jack led the Nets with 23 points off the bench, and Brook Lopez had 20.

“All is not lost,” Jack said. “Our confidence is high.”

On a night when the Hawks announced an agreement to sell the team to a group led by billionaire businessman Antony Ressler for $850 million, Atlanta got off to another quick start in a repeat of Game 1. Horford’s jumper made it 27-15 late in the first quarter.

The Nets fought back, just as they did in the opener won by the Hawks 99-92. Brooklyn ripped off 12 straight points in the second period to take its first lead.

The Hawks hardly looked like a team that set a franchise record with 60 wins and finished 22 games ahead of Brooklyn in the East. They missed nine straight shots and turned it over three times before Millsap’s layup broke the skid.

Even after the Hawks pushed back out to an 11-point lead in the final quarter, Brooklyn wouldn’t go away. Jack hit another 3 from the corner to bring the Nets to 90-89. After DeMarre Carroll scored his only basket of the night off a slick pass from Millsap, Alan Anderson made a reverse layup off the baseline to again make it a one-point game.

Millsap was fouled but made only one of two free throws, giving the Nets a chance to tie it or grab the lead with a 3-pointer.

They couldn’t have asked for a better look. Williams faked a 3 from the corner, sending Kent Bazemore flying by, and stepped up for a shot with no one around. It spun out and was snatched by Korver.

“This ain’t no pushover team,” Millsap said of the Nets. “There’s not going to be games where we can just run over them.”

Nets: F Mirza Teletovic played his first game in three months after being treated for multiple blood clots in his lungs. He missed his only two shots while playing just under 4 minutes. … Joe Johnson scored 19 points, but Brooklyn’s other three starters — Williams, Bojan Bogdanovic and Thaddeus Young — combined for only 12.

Hawks: Carroll had a tough night after scoring 17 points in Game 1. He went 0 of 5 from 3-point range. … Dennis Schroder scored 12 points to lead the reserves, but the remaining backups contributed only 16 points on 5-of-20 shooting.

Ressler, who made an unsuccessful bid for the Los Angeles Clippers last year, leads a group that also includes former NBA star Grant Hill and Spanx founder Sara Blakely. They still must be approved by the league’s owners.

“We are honored and thrilled to have been chosen to become the new stewards of the Hawks,” said Ressler, who did not attend the game.

BATTLE OF THE BOARDS

The Nets have dominated the boards, helping them stay close to the Hawks.

Atlanta failed to get much help from its guards. Outside of Horford, Carroll (eight rebounds) and Millsap (seven), no one on the Hawks had more than three.

“We’ve not been great at it all year,” Horford said. “But we’ve done enough to get by.”