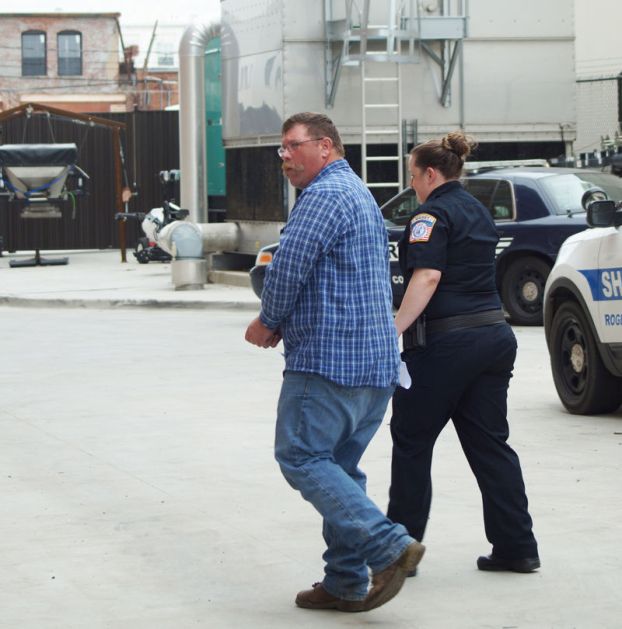 CLAREMORE, Okla. – A state investigation into accusations of wrongdoing by county government officials in Oklahoma — triggered by a controversial 2013 citizens’ petition for a local grand jury investigation — has resulted in embezzlement charges against former a former commissioner in Rogers County for personal use of county equipment, materials and labor.

Kirt Thacker, 45, of Inola, was arrested Friday afternoon by agents of the Oklahoma State Bureau of Investigation and booked into the county jail in Claremore. He was later released on $30,000 bail.

• Ordering a county employee to deliver a bulldozer, track hoe and portable fuel tank to Thacker’s farm for building a stock pond and making other property improvements during June and July of 2011.

• Directing the reconstruction of the portion of a private driveway leading to the Rogers County Cherokee Association headquarters in Tiawah, a project that used 13 county road crew members and several county trucks, a tractor, backhoe, brush chipper and chain saws on May 29, 2013.

Pruitt said the state investigation into the misappropriation of county property started with issues raised in the citizens’ petition in 2013. The petition collected more than 7,000 verified voter signatures asking for a local grand jury investigation of Thacker and other county officials, including then-District Attorney Janice Steidley. But a Tulsa judge disqualified them because sponsors obtained the names on unauthorized forms.

A state grand jury then reviewed the petition’s accusations, concluding none of the allegations against Steidley’s office rose to the level of a crime.

The state grand jury made no finding on the accusations involving Thacker, but the attorney general said his office, with the assistance of the OSBI, continued its investigation.

“The citizens of Rogers County, and every Oklahoma county, should have confidence that their elected officials are not using their positions as public servants for personal financial gain,” said Pruitt.

Jessica Brown, OSBI public information officer, said it took investigators time “to get to this point, but I hope it shows that we (OSBI) don’t give up. We’ll keep investigating something as long as it takes and put as much work into it as is needed.”

The Claremore Progress could not reach Thacker for comment. He represented District 3 on the county commission and served as chairman of the board for a time. He lost his bid for re-election last year. A state audit released in early March said he failed to keep accurate records of county equipment.