Horror and hope in Cleveland: Abducted women tell their stories 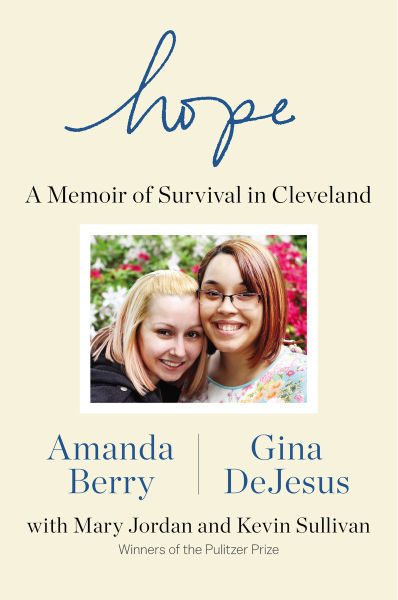 Amanda Berry had become accustomed to constant sexual assaults by her captor, Ariel Castro, a Cleveland school bus driver. But on the morning of March 3, 2006, Berry was horrified by Castro’s violent demand even as she was mourning her mother.

It would be seven more years before Berry and two other young women locked in Castro’s house, Gina DeJesus and Michelle Knight, were able to escape. On May 6, 2013, Berry kicked out the front door, grabbed a neighbor’s phone and frantically told a 911 operator: “Help me! I’m Amanda Berry!”

Castro was arrested and given a prison sentence that showed the world’s revulsion at his crimes: life without parole, plus 1,000 years. At 53, he hanged himself in his cell after just one month.

Now, for the first time, Berry, 29, and DeJesus, 25, are recounting their experience in a new book, which describes their decade inside Castro’s small house, and their ongoing struggle to recover and rebuild their lives.

Central to their survival: a little girl named Jocelyn, who Berry believes was conceived that morning after her mother died. She was born on Christmas Day in 2006, in a plastic wading pool set on the broken-down bed where Berry was kept chained to a radiator.

From the moment she arrived, Jocelyn made a dark place brighter. And as she grew older, she would, in many ways, help save them all.

Amanda: The pains started a few hours ago, and they’re getting stronger. I wish I was in a hospital. I’ve been trying to get myself mentally ready for weeks, but I’m still so worried.

It’s 12:30 — after midnight, so it’s now officially Christmas. I’ve been watching TV while he’s asleep next to me in his bed in the dining room. Lately I’ve been sleeping down here most nights. He wants me to, and it’s easier just to do what he wants.

The bathroom is right next door, which is an even bigger deal now that I’m pregnant and have to pee all the time. But most nights he still makes me go in a bucket so he doesn’t have to get up to unchain me.

He grunts, sits up, and goes to the kitchen and reaches into the red Pringles can on the table where he keeps the keys to my chains. He unlocks the padlock on my ankle. The chain seems even heavier these days, and it drops to the floor with a thud.

The heat is on, but because there’s no radiator in the kitchen, it’s freezing all winter. I hurry through it and into the bathroom. He’s standing there half-asleep, leaning against the sink, waiting. He looks worried. He thinks I could be in labor.

“Do you think you’re having the baby?” he asks.

Then I hear something go “pop.” It startles me. He heard it, too, and I show him that there’s a little blood.

“I think your water just broke,” he says.

I’m starting to get more scared. What will I do if everything doesn’t go just right? He won’t take me to a hospital. I don’t want to die here. I have to stay calm.

“I don’t know what’s going on, but you might be having the baby,” he says. “Let’s go upstairs.”

He wants me to have the baby in my room because the windows are so well covered there. It would be hard for the neighbors to hear me screaming while I’m in labor, or to hear a baby crying.

He walks with me up the stairs, slowly. I sit on my bed as he opens the door to Gina and Michelle’s room.

I can’t do this alone, and he has no idea what to do. But Michelle had a baby before she was kidnapped, so she knows what to expect. And she said that she also helped deliver a baby for somebody in her family. Besides, he told her she had to help me, so she has no choice.

He keeps Gina locked in her room.

He runs upstairs to the attic and comes back with a plastic wading pool that he sets on the bed. It’s white, with blue lines and a whole bunch of colorful fish, and nearly covers the whole queen-size bed.

This is his idea for how to avoid making a huge mess because he doesn’t want me to ruin his mattress. It’s weird and uncomfortable, but I’m in pain and not arguing. I take off everything but my T-shirt. It’s cold, especially with my bare skin against the plastic. I’m shivering and feel helpless and exposed.

He goes into another room and comes back with a warm black sweater. The contractions have really started now, and the pains are sharper.

He sits down in an old rocking chair that he brought into the room and is reading a medical book — the chapters about pregnancy and birth.

I scream as the contractions come faster.

I ball it up and put it into my mouth to muffle the sound. It’s harder to breathe. The cloth is drying out my mouth, and I tell him, “I’m thirsty.”

He says he read that ice chips are best, so he hurries down to the kitchen to get some. He’s barely out of the room when I push, and the baby slips out.

The next few moments are a blur. I think I passed out.

For a minute there’s no sound, and I’m so scared.

Then I hear a baby crying.

Amanda: He comes back into the room and sees the baby. He’s thrilled. His eyes are wide as he gently takes her and cradles her in his arms.

I hold my baby on my chest and touch her for the first time. I can’t believe her little face. Her eyes are wide open. She’s so cute. And so quiet. In the movies, new babies are always crying. She’s just lying here with me, so calm. I’m amazed. I stare into her eyes. She’s all I can see.

He’s handing me my stubby little school scissors, the ones I use to cut pictures out of magazines.

Finally he sees that there’s no way I’m going to do it, so he takes the little scissors and snips the cord. Soon after that I push out the placenta.

He says we should go downstairs and get everybody cleaned up. He turns up the radio in case the baby cries. It’s Christmas music.

He carries the baby as we walk down to the bathroom. I’m sore and still sort of in shock. He wants me and the baby to get into the tub with him. It’s tight, but we figure out how to cross our legs so we all fit. He’s washing her tiny body.

“She’s so small,” he says. “You have to be really careful with her because she’s so fragile.”

The look in his eyes is amazing. He’s so in love with this little girl already.

There’s not a lot of good in his life. It’s his own fault, but sometimes I think he’s as stuck in this house as we are. He and his ex split years ago, he hates his job, and he’s going to prison forever if the police find out what he’s done to us. Now he’s sitting here holding this beautiful baby who is nothing but pure goodness, and he’s happy. I think she gives him new meaning in his life.

He finds a brown cardboard box to use as a bassinet. We put some towels and a little pillow in it and set it on the bed, and he lies down next to it. He is smiling. I can’t remember ever seeing him this happy.

“She needs diapers,” I tell him.

He leaves the room and comes back a few minutes later with scissors and a handful of old white athletic socks. He trims the top off and then cuts two little holes in the toe for her legs. We slip her into it, and that’s her first diaper.

Then he takes another sock and cuts a bigger hole in the toe for her head, and two little holes for her arms. We slip it over her head, and it’s like a little dress.

Someday I’m going to have a lot to explain to her.

Adapted from “Hope: A Memoir of Survival in Cleveland,” by Amanda Berry and Gina DeJesus, with Mary Jordan and Kevin Sullivan. Published by Viking on April 27, 2015. Jordan and Sullivan are Washington Post staff writers.