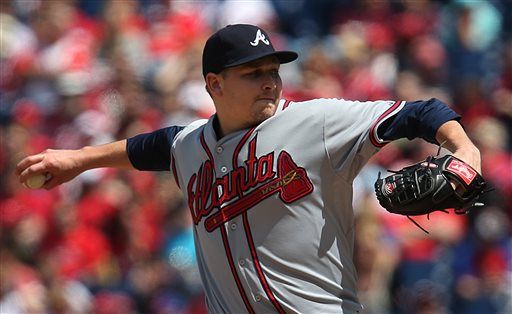 PHILADELPHIA (AP) — For the Atlanta Braves, a road trip that could have helped turn them into NL East contenders has them headed home looking for relief.

Ryan Howard hit his second homer in two games, leading the Philadelphia Phillies past the Atlanta Braves 5-4 on Sunday.

The Braves finished 3-6 on the road trip and dropped to .500 (9-9) on the season. The Braves head home to open a 10-game homestand, which includes a three-game series against Washington, a four-game set with the Reds and three with the Phillies.

Howard continued to pile on against the Braves. He hit a two-run homer on Friday and a three-run shot in the first inning against Trevor Cahill (0-3) on Sunday.

Howard, who once hit 45 or more homers in a season each year from 2006-09, has all three of his homers in the last five games after hitting none in the first 11 and bumped his average up to .193.

“I’ve been feeling like I’ve been swinging it pretty well,” he said. “The results may not necessarily show, but it’s all about how you’re feeling with the swings. Eventually, they’re going to start to drop.”

Howard was dropped from fourth to seventh in Philadelphia’s lineup earlier this month, the lowest in the order he’d batted in almost 10 years. Even with a sub.-200 average, Howard hit fifth against Cahill.

Howard has $60 million remaining in his $125 million, five-year contract he signed with the Phillies in 2010, leaving the franchise with few options for their 35-year-old former slugger.

Howard could possibly help his trade value with a few more homers and an uptick in batting average. In a rebuilding mode and in last place in the NL East, the Phillies would certainly have to eat a large portion of Howard’s salary in any potential deal.

“I feel fine,” Howard said. “All you can do is go out there and swing the bat.”

Jonathan Papelbon had his fourth save. He allowed Alberto Callaspo’s pinch-hit solo homer in the ninth.

Ben Revere knocked in the go-ahead run with a triple and the Phillies won two of three games in the series.

Jerome Williams (2-1) allowed three runs and eight hits in 6 2-3 innings for the Phillies.

Howard knocked a full-count pitch in the front row of the right field seats for a 3-2 lead. Chase Utley, who walked, scored on that homer. Like Howard, the 2008 World Series champion holdover is having his own awful season. Utley has continued to bat third, even though he’s batting .121 (7 for 58) with two homers and nine RBIs.

The Braves scored twice in the first when a pair of walks came back to get Williams. Jace Peterson’s two-RBI single to right gave the Braves an early lead. They tied it 3-all in the third when Kelly Johnson ripped a shot off Howard’s glove and the ball bounced away for what was ruled a double.

Revere made it 4-3 in the fifth, and the Phillies tacked on an unearned run in the seventh.

Williams won his second straight start and three other relievers combined to finish off the Braves.

Cahill allowed four runs in six innings, his longest outing of the season.

“One bad pitch, but I bounced back pretty good after that,” Cahill said.

Neither team had any injuries of note. Papelbon pitched a day after he had a migraine.

Braves: RHP Doug Fister (1-0, 2.37 ERA) gets the call when the Braves open a three-game series Monday against Washington.

Phillies: LHP Cole Hamels (0-2, 3.75 ERA) gets the call in the opener of a four-game series Monday at St. Louis. But all eyes are on RHP Severino Gonzalez who will make his major league debut Tuesday. The 22-year-old is 1-1 with a 3.57 ERA in three starts for Triple-A Lehigh Valley. He was the 2013 winner of the Paul Owens Award as the best pitcher in Philadelphia’s minor league system. He has walked only 67 in 415 1-3 innings.

Papelbon earned his 329th career save, moving him into a tie with Francisco Cordero for 14th on the career list. Papelbon, already Boston’s career saves leader with 219, earned his 110th with the Phillies and is just two shy of Jose Mesa’s franchise record of 112.