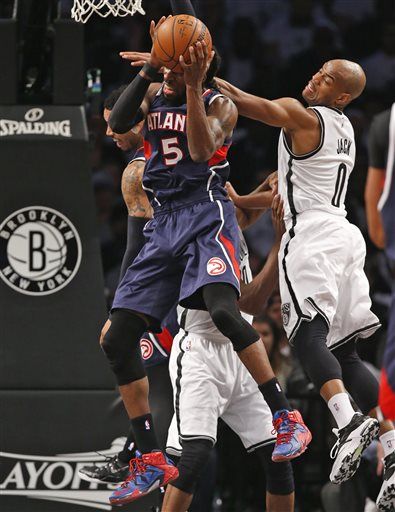 Nets beat Hawks behind 35 from Williams, tie series at 2-2

NEW YORK (AP) — Deron Williams finally delivered the game that’s expected of him, and he wasn’t going to let the Nets lose it.

And after he finished carrying them into a 2-2 tie with the Eastern Conference’s No. 1 seed, the guy who had been being beaten up physically on the court and by fans and media off it knew how important his performance was.

“We really needed to get this one to stay in the series,” he said, “and so it was definitely one of my better games this year for sure and probably as a Net.”

Williams rebounded from two dismal games by tying a playoff career high with 35 points, and Brooklyn pulled out a 120-115 overtime victory over the Atlanta Hawks on Monday night in Game 4.

The Nets, just 38-44 in the regular season, moved two victories from becoming the sixth No. 8 seed to beat a No. 1 — only the fourth since the first round became best-of-seven.

“This is what the playoffs are all about. What we expect is to be challenged, and this is a great challenge for us,” Hawks coach Mike Budenholzer said.

Bojan Bogdanovic made the go-ahead 3-pointer with 1:25 left in overtime but the Nets never would have gotten there without Williams, whose 16 points in the fourth quarter were two fewer than he had total in the first three games of the series.

Brook Lopez had 26 points and 10 rebounds for the Nets.

Kyle Korver had 16 points and 11 rebounds, but the NBA’s leading 3-point shooter missed three straight from behind the arc in the final seconds with the Hawks trailing by three.

The Nets finally got the rebound and former Hawks star Joe Johnson closed it out with two free throws, ending what was by far the best game of the series and perhaps the most memorable one in the 3-season history of NBA basketball in Brooklyn.

“What a basketball game that was,” Nets coach Lionel Hollins said. “To me, that’s what playing this sport is all about.”

Neither team had reached 100 points in any of the first three games and the Hawks had made only 39 percent of their shots. But they were mostly back in the form that produced 60 wins in the regular season — but the Nets were just a little better.

That’s mostly because of Williams, who was 1 for 7 and 1 for 8 in the last two games, sitting out the last 16 minutes of Game 3 after hurting his tailbone and watching as the Nets seized control without him.

But he moved well and shot better Monday, making seven 3-pointers, including going 4 of 4 in his fourth-quarter flurry.

“We understand and we know that Deron’s capable of doing that,” Hawks center Al Horford said. “You can only contain that type of player for so long. He had three not-so great games. He came out tonight and he was the difference.”

Williams had only two free throws in overtime, capping the Nets’ run of seven straight points after Horford gave Atlanta its last lead, 113-111 with 1:44 remaining.

Williams is a two-time Olympic gold medalist but has battled injuries since signing a five-year, $98.5 million contract in 2012. He averaged just 13 points during the regular season, and when he followed that with a dismal start to this series, Hollins had to defend his point guard from criticism during practice Sunday.

Williams then saved the Nets from a 3-1 deficit with his huge fourth quarter, when he even hit a turnaround 3-pointer from well behind the arc as the shot clock was set to expire.

Millsap had 16 points and 12 rebounds for the Hawks, who had beaten the Nets six straight times this season before Brooklyn won both games here.

Hawks: Horford had 17 points and seven rebounds. He returned to the locker room in the first half to have his right pinkie finger taped again.

Both teams wore different uniforms than Saturday, when the Nets wore their road blacks and the Hawks were in red. Brooklyn was back to the home whites so the Hawks switched to their blues.

Korver said his three late 3-point attempts all felt good, but when none went in, Horford knew what they meant for Atlanta.

Atlanta Braves left fielder Kelly Johnson, right, is greeted at the dugout by his teammates after hitting a two-run home... read more