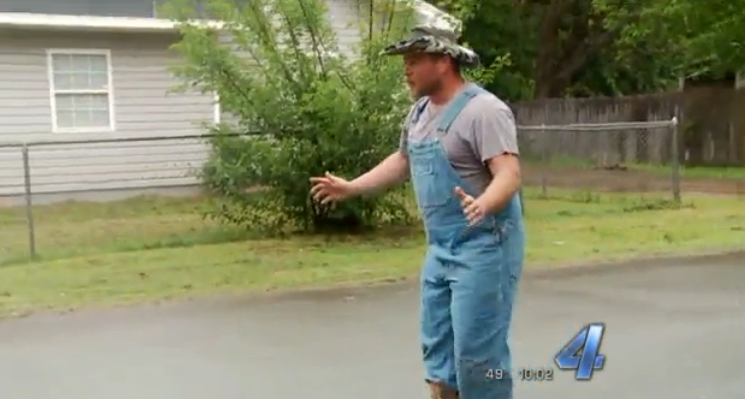 “Floyd Briggs went out into the street and stood in the street to attempt to stop the motorcycle,” Officer Michael Harper-Head said in an incident report.

As the motorcycle swerved around Briggs, the rider, Michael Coppedge, lost control and wrecked.

Chickasha Police began pursuing Coppedge after he was clocked at 63 miles per hour in a 30 mile per hour zone, according to an incident report.

“I said ‘I gotta stop this guy before he hurts a little kid,’” Briggs told KFOR-TV. “I ain’t no football player either.”

At one point, officers lost sight of the motorcycle and Sergeant John Young told officers to discontinue the pursuit. Officers disengaged from the pursuit.

It was then reported that the motorcycle had wrecked and Coppedge was on foot.

What officers didn’t know was that Briggs was hot on his trail.

“He got up… and I just went after him,” Briggs said. “I was running out of steam very quick. I’m not very aerodynamic.”

Thanks to Briggs’ efforts, officers caught up with Coppedge and ordered him to the ground at gunpoint.

Coppedge said he fled because he did not have a license or insurance.

For Briggs, that’s a poor excuse for endangering the lives of his neighbors.

“That’s not a serious thing right there… you get a ticket, slap on the hand, pay your fine, and go fix your problem,” Briggs said.

Coppedege was treated at Grady Memorial Hospital for injuries sustained during the collision and then transported to the Grady County Jail.

He was charged with eluding police, reckless driving, operating a motor vehicle without a license, leaving the scene of a property damage collision–it was later reported that the motorcycle skidded into a parked vehicle–and failure to comply with compulsory insurance law.

Meanwhile Briggs, despite his new hero status, pleaded guilty to failing to comply with good manners during the incident.

“I did use some language that just isn’t how I talk,” he said. “Some of the words I used, I was pretty worked up. I’m sorry for that.”

The Express-Star in Chickasha, Okla. contributed to this story.