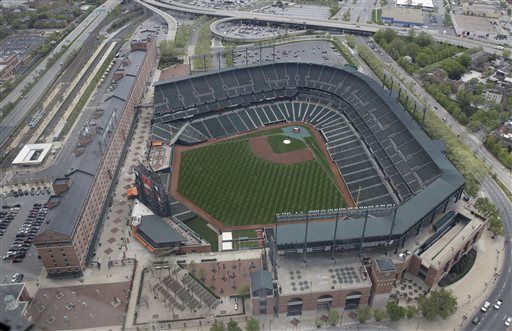 In this aerial photo, Oriole Park at Camden Yards sits empty, Tuesday, April 28, 2015, in Baltimore, as unrest that occurred after Freddie Gray’s funeral continues into a second day. The Baltimore Orioles postponed Tuesday’s baseball game against the Chicago White Sox, and Wednesday’s game will be closed to the public, followed rioting in Baltimore. Gray died from spinal injuries about a week after he was arrested and transported in a Baltimore Police Department van. (AP Photo/Patrick Semansky)