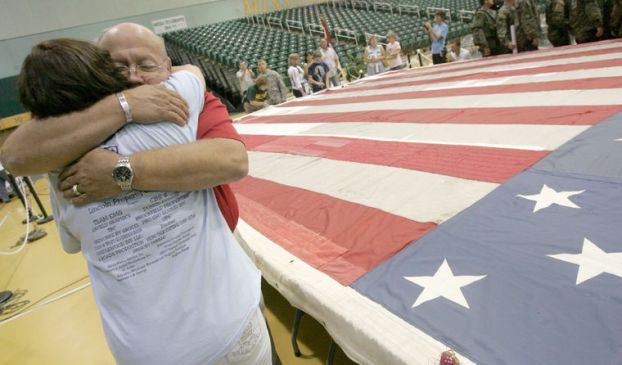 JOPLIN, Mo. – A poignant picture by Joplin Globe photographer Roger Nomer of the National 9/11 Flag’s last stop on a restoration tour has been selected for a photo booklet to compliment the flag’s exhibition at the National September 11 Memorial and Museum in New York City.

The photo shows Denny Deters of Glenwood, Iowa, hugging Holly Vitchers of New York in front of the American flag found shredded at Ground Zero and repaired as a symbol of healing  over a three-year, piece-by-piece public stitching journey to other disaster sites across the country.

The final quilting Bee occurred in Joplin on the 10th anniversary of the Sept. 9, 2001, terrorist attacks on New York’s World Trade Center and four months after a historic tornado devastated this southwest Missouri city in May of 2011. More than 1,000 tornado survivors stitched the flag’s last patches.

Jeff Parness, executive director of sponsoring New York Says Thank You Foundation, said Nomer’s photo captured the emotions of two people who were deeply connected to the 20-by-30 foot flag.

Vitchers’ husband, Charles, was a Ground Zero supervisor who rescued the flag from the rubble. Deters was a Boy Scout executive at the Little Sioux Scout Ranch in western Iowa, where four young Scouts were killed by a tornado that ripped through the camp in June of 2008; he and his wife, Carolyn, served as managers of the flag’s journey.

“So what you see in that photograph are the stories of love and healing from somebody directly connected to the 9/11 tragedy in New York and somebody who was directly connected to this tragedy with the Boy Scouts,” said Parness. “And the fact that they happened to be in Joplin to help the community heal on the 10th anniversary of 9/11 — It’s a very powerful photo.”

“He spent so much time with it, and it really became such a passionate project for him,” said Nomer. “He was really impressed by the turnout in Joplin, and he said it meant a lot to him that Joplin was the final stop because he could tell it meant so much to the people around him.

The flag ended up in Ground Zero shortly after 9-11 when wind blew it from the side of a construction site overlooking the disaster zone. It was intended as a symbol of hope for volunteers looking for survivors.

Charles Vitchers retrieved it from the debris and kept in a plastic bag until the first restoring stitches were sewn in 2008 by survivors of a Greensburg, Kansas, tornado.

The flag has since been stitched by soldiers and schoolchildren who survived the shooting at Fort Hood, Texas; by World War II veterans on the deck of the USS Missouri in Pearl Harbor; by the family of Martin Luther King Jr.; by 20 members of Congress at the U.S. Capitol; and by thousands of servicemen and servicewomen across the country.

It also includes a piece of the U.S. flag placed under President Lincoln when he was shot at Ford’s Theater as well as threads from the flag that flew at Fort McHenry during the War of 1812, inspring Francis Scott Key to compose the national anthem.

The 9/11 flag will go on permanent display at the Ground Zero museum this spring. The photo booklet depicting its history is being published by the New York Says Thank You Foundation.

Emily Younker is a reporter for the Joplin, Mo., Globe.