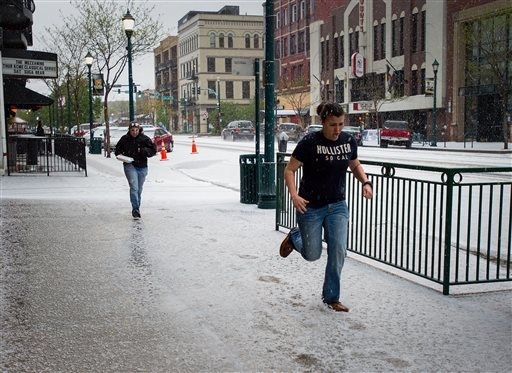 CISCO, Texas (AP) — Another round of severe weather will take aim at Plains states and the Midwest on Sunday, while a tropical storm spun off the coast of South Carolina and heavy snow fell in the western Dakotas.

A strong line of storms moved through the Dallas-Fort Worth area on Sunday morning, pushing east and north into Oklahoma. Tropical Storm Ana was reported early Sunday to be just off the coast of South Carolina, weakening with top sustained winds of 45 mph.

About 100 miles west of Fort Worth, sparsely populated ranching and farming communities in North Texas were left to clean up Sunday after several tornadoes touched down in the area Saturday, leaving one person dead and others unaccounted for, authorities said. One shattered homes in a rural area south of Cisco, a town of a few thousand people, Eastland County Judge Rex Fields said.

“The homes that I’ve seen, there are just maybe one or two walls standing,” Fields, who also serves as the county’s emergency services coordinator, told The Associated Press. Authorities were going house to house to assess the damage on Saturday, but Fields said that proved difficult amid the heavy rainfall.

A message left with the town’s fire chief was not immediately returned Sunday morning.

Elsewhere, storms brought heavy rain and quarter-sized hail to parts of southwest Oklahoma on Saturday afternoon, and a band of rain halted a NASCAR Sprint Cup race on Saturday night at Kansas Speedway in the Kansas City area.

National Weather Service meteorologist Bruce Sullivan said some areas up into Wyoming and South Dakota’s Black Hills could be in for several inches of snowfall — “unusual” for so late in the year — and four to five inches of snow were forecast Sunday for Rapid City, South Dakota, accompanied by 20 mph to 30 mph winds.