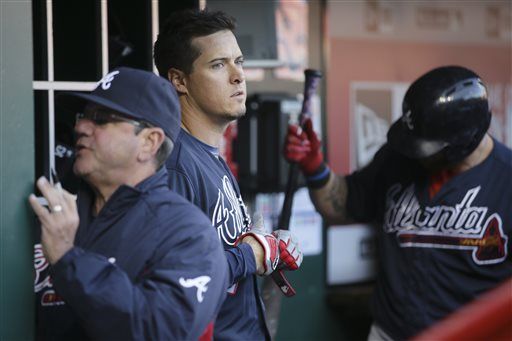 CINCINNATI (AP) — Reds rookie Raisel Iglesias may have pitched his way on to the Reds’ roster.

The 25-year-old Cuba native tossed eight innings of two-hit baseball in his second career start and Todd Frazier connected for his 12th home run of the season, leading Cincinnati to a 5-1 win over the Atlanta Braves on Wednesday. He possibly earned a spot on the staff if not the rotation.

“There is a scenario that he can stay with us,” manager Bryan Price said after the game. “He has a better understanding of where he needs to go with his pitches than most pitchers his age.”

Iglesias and Michael Lorenzen have both made their debuts in the early going. Either can work out of the bullpen when not starting.

Marlon Byrd added a solo homer, his seventh of the season and fifth in his last 10 games. The Reds won the rubber match of the three-game series and seven-game season series between the teams.

The Braves have lost five of their last six.

Iglesias (1-0) was recalled from Triple-A Louisville before the game. He took a no-hitter into the sixth inning. Pinch-hitter Eric Young Jr. broke it up with a leadoff bloop single to shallow center field. Another pinch-hitter, Pedro Ciriaco, became the first batter to get past second base when he led off the eighth with a triple and scored on Nick Markasis’ groundout.

Iglesias, who left with no decision in his debut on April 12 against St. Louis, allowed three walks and struck out five.

“It is a great achievement for a baseball player to get a win over a great team like the Atlanta Braves,” Iglesias said through interpreter Tomas Vera. “The emotions were the same as my first start but I had the confidence to go deeper in the game from what I worked on in Triple A. I have a personal rule. I have eight players on my side and only one against me. I wasn’t thinking about a no-hitter. I was thinking about them putting the ball in play so I could pitch longer and save the bullpen.”

The Braves had two runners on base in one inning just once. Iglesias threw 103 pitches, 74 for strikes. He acknowledged the applause of the crowd of 17,747 by waving his cap as he walked into the dugout after the eighth inning.

“He (Iglesias) kind of reminded me of El Duque with that high leg kick and different arm angles,” said Atlanta manager Fredi Gonzalez, who is also a native of Cuba. “We only had him on the ropes once and he got out of it.”

Joey Votto followed Zack Cozart’s first-inning double with a run-scoring line drive up the middle that glanced off of Atlanta starter Eric Stults’ glove on its way to center field.

That run was the first allowed by Stults (1-4) in the first inning in six starts this season.

Byrd led off the second with a 343-foot homer into the first row of the left field seats. Frazier made it 4-0 in third with his second homer in as many nights, a 432-foot shot to center field that tied Washington’s Bryce Harper for the National League lead. Billy Hamilton tripled and scored on Cozart’s sacrifice fly in the fifth.

Braves: Left fielder Kelly Johnson left the game in the top of the first inning after suffering a right oblique strain while batting. Jonny Gomes pinch hit and stayed in to play left field.

Braves: The Braves on Friday open their second three-game series of the season at Miami, where they swept the Marlins to open the season.

Reds: Right-hander Johnny Cueto hopes to extend his mastery over the Giants in the opener of a four-game series on Thursday. Cueto is 3-1 with a 1.98 ERA in five career starts against San Francisco.