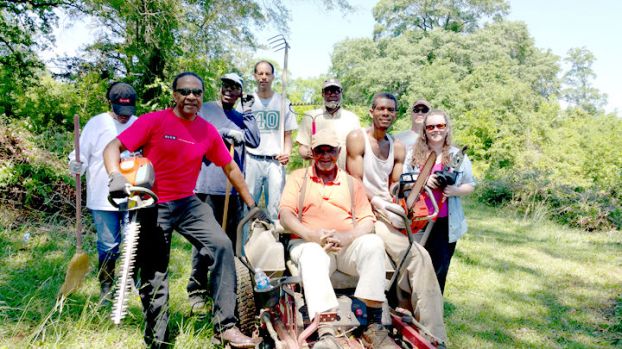 AMERICUS – The Americus-Sumter County Movement Remembered Committee has begun a cleanup of the New Corinth Baptist Church cemetery on Hooks Mill Road. The cleanup, which began in April, is a community effort to protect and preserve local institutions, churches, prison stockades, streets and buildings, that have historical roots to the Americus Civil Rights Movement, and the African American community in general.

The church is on the National Historic Registry, and was one of the first churches in Sumter County to permit civil rights mass meetings in 1962.

Led by two courageous deacons, Leland Cooper and Lonnie Evans from the Leslie-Desoto community, New Corinth and New Pineville Baptist Church laid the foundation for the Americus Civil Rights Movement, despite threats from the Ku Klux Klan to burn and bomb their churches.

The cemetery is the final resting place for many of Americus’ most prominent and prolific African American citizens, including Rosa Lee Ingram who, in 1947, was convicted and sentenced to death along with two of her teenage sons, for the self defense killing of a white sharecropper who had attacked her as she worked in the field. It would take ten years before their release in1957, from the Reidsville State Prison due to an intense local, national and international campaign to free them.

In a symbolic gesture, the clean up began with the clearing of her family burial plot, but will continue until the entire cemetery is restored.

The cemetery clean up is a massive undertaking and will require broad community assistance. For those wishing to volunteer or to loan tools, you may sign up at the Magnolia Village office located at 104 Magnolia Court, the Lake Blackshear Regional Library at 307 East Lamar Street, or contact the ASCMRC at: (404)781-5459. Tools most needed are mowers, chain saws, bow saws, swing blades heavy duty rakes, hedge and grass trimmers.

AMERICUS – The deadline to submit enrollment packets for students attending the Furlow Charter School for the school year 2015–16... read more