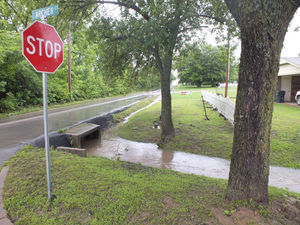 CLAREMORE, Okla. – One firefighter died and a second was injured in a northeast Oklahoma city when they were swept down a storm drain while attempting to rescue residents from rising flood waters.

Fire Chief Sean Douglas said the dead firefighter presumably drowned when he was pulled in to the storm drain around 11:30 p.m. Saturday because of the high water and got trapped inside of it.

Douglas said a fellow firefighter rushed to the victim’s assistance but also was sucked into the storm drain. He emerged at the other end, and was taken to a local hospital for treatment of minor injuries.

It took emergency rescue crews two hours to find the body of the victim, said Douglas.

Oklahoma and Texas were struck by heavy rains over the weekend, causing widespread flooding in both states. Several highways and streets were closed by high water in Oklahoma.

Claremore and the surrounding area were pelted with heavy rains Saturday night leading to flash flooding concerns in a number of places.

Douglas said Claremore firefighters received an alert around 10:30 p.m. Saturday to rescue several residents from homes threatened by flood waters in the Archer Court section of the city off Highway 20.

He said the firefighter who died likely did not notice the storm drain, got caught up in the force of the water, then ended up trapped inside the 200-foot drain structure.

The second firefighter observed the distressed situation, rushed to help his colleague, and also was swept into the drain. But Douglas said he came out the other end.

The victim was not immediately identified. The fireman who attempted to rescue him was identified as Zane James. Douglas said his injuries were minor.