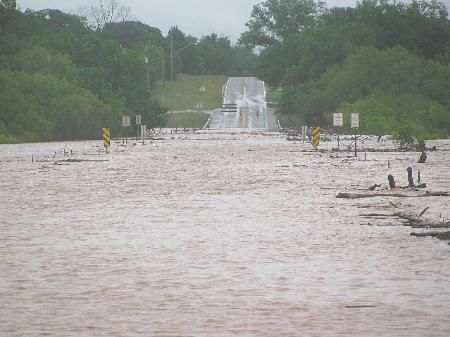 Flooding leaves some stranded in Oklahoma

Following more torrential rain, the flooding of Oklahoma bridges left some residents in neighborhoods around Lake Thunderbird marooned in their own homes.

Lake Thunderbird Authority increased the rate of water released from the dam at 6 a.m. Sunday. By 1 p.m., two conduit gates had been opened to 10 feet. At 5 p.m., the pool elevation was 1,053.10 feet, topping guard rails at the lake, and the flood pool was 145.21 percent full.

“We dealt with all of that last night, but nothing today,” Burnett said.

Norman Fire Department Deputy Chief Jim Bailey said some residents were ferried by canoe through flood waters near the lake.

“They’re stuck kind of in a bad spot,” Bailey said.

Norman firefighters conducted 21 water rescues Saturday night and Sunday morning, deploying boats to rescue four stranded motorists who were washed off the road. No injuries were reported, he said.

“As long as we don’t get any more rain, it will start receding,” Bailey said.

Norman resident Fred Pope knew there was a problem when he went to retrieve his newspapers Sunday morning. Every morning, like clockwork, he picks up a copy of The Norman Transcript and The Oklahoman. Both were not in their usual spot, Pope said.

“I kind of guessed that we had enough rain that the delivery people couldn’t make it around,” Pope said.

Pope, who lives with his wife Theo, said he was “among those stranded,” but the worst area affected appeared to be the Kiwanis Youth Camp, which at one point had been covered with six feet of flood water.

“It’s impossible to drive a car through there,” Pope said.

Some residents traversed through two feet of water at the Little River Road and Alameda to get to the other side of town, but Pope said he was not willing to risk stalling out on the road.

“We don’t have a vehicle that I would dare to try to go through that two feet deep water. It may be possible that it’s a little more than that,” Pope said.

Pope said his neighbors reached out to him to ensure he and his wife were safe — including one who had come to his house on his tractor.

“As far as everything is concerned, we’re fine. We have food,” Pope said.

One of his neighbors, who keeps a rain gauge, said the area received about 6 inches of precipitation from the most recent bout of storms.

CLAREMORE, Okla. – One firefighter died and a second was injured in a northeast Oklahoma city when they were swept... read more