Why all the hate towards Indian Americans who dominate the National Spelling Bee? 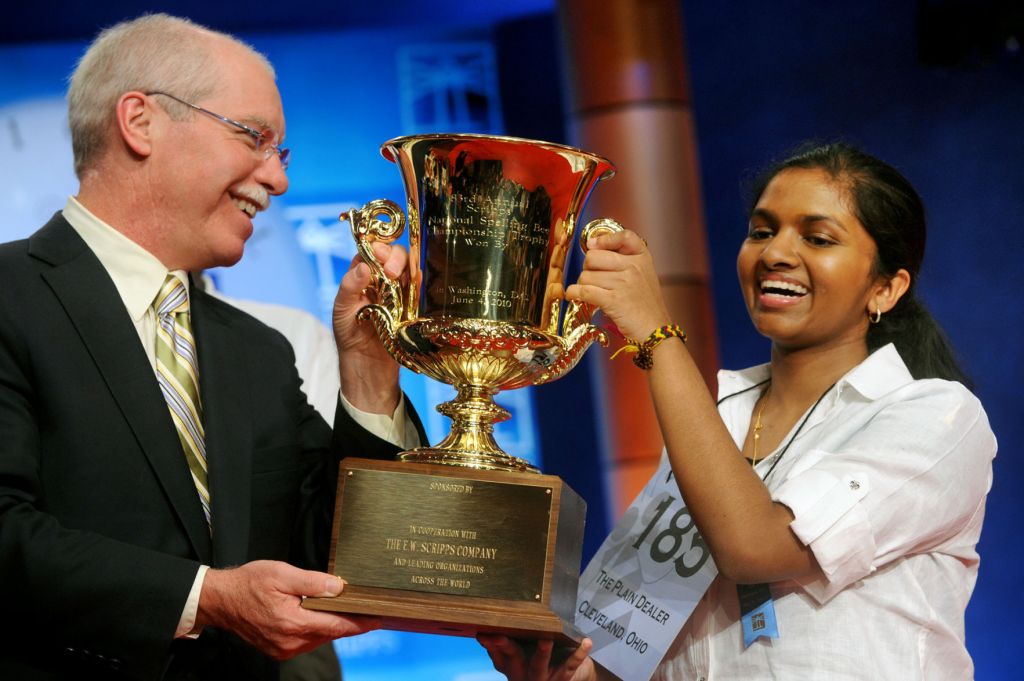 The streak is as impressive as it is difficult to explain. In much the same way that Kenyan runners have owned the Boston Marathon, Indian American kids have placed a stranglehold on the Scripps National Spelling Bee, winning it now for seven years in a row and all but four of the last 15 years.

The streak has been much discussed and analyzed in recent years — except by the people who actually run the bee. For the first time, Paige Kimble, the bee’s longtime director, agreed last week to address the sensitive question of why Indian Americans have come to dominate the contest, which gets underway Tuesday at the Gaylord National Resort and Convention Center in National Harbor, Md.

Part of her motivation: the outpouring of ugliness aimed at last year’s co-champions, Sriram Hathwar and Ansun Sujoe, on social media.

“We certainly followed the coverage last year,” Kimble said, “and we are aware of Twitter posts that are not nice, that indicate that we have a long way to go as a country in embracing all of our immigrant population.”

Even she’s not sure how to explain the extraordinary performance of Indian American youngsters in the national bee compared with other groups. All bee wannabes devote thousands of hours studying tens of thousands of words. The difference for Indian American kids, Kimble said, may be a commitment to pursue the spelling championship over many years.

“How hard a child works is a very individual factor,” said Kimble, who won the national bee in 1981. “But what might be happening [with Indian American contestants] is that there might be perseverance for the National Spelling Bee goal over a longer period of time.”

Indeed, of the Indian American champions over the past 15 years, only one, Pratyush Buddiga, won on a first trip to the national bee in 2002. The others won after multiple trips, including last year’s co-champ Hathwar, who made it to the national bee five times before winning, and Kavya Shivashankar in 2009 and Sameer Mishra in 2008, who both won on their fourth trips.

Kimble and other bee organizers were appalled by the reaction to last year’s contest, when Sriram, then 14, and his co-winner Ansun, then 13, were greeted with a barrage of racist comments on Facebook and Twitter:

“The kids in the spelling bee should only be AMERICAN”

“No American sounding names who won the spelling B. #sad#fail”

“We need an american to win this spelling bee #tiredofindians”

The outburst stung an organization that sees itself as representative of the American ideal of cultural diversity.

Despite the backlash, for Indian Americans the growing spelling dynasty has become a source of great pride. Indian Americans account for just under 1 percent of the U.S. population, but make up more than a fifth of the 285 spellers competing this week in the 88th edition of the bee. If recent trends hold, they would account for more than a third of the contest’s 50 semifinalists.

“It’s hard to say it’s a coincidence,” said Shalini Shankar, an anthropology professor at Northwestern University who has spent the past 18 months studying spelling competitions across the country.

Shankar points out that immigrants from India, who are the parents and grandparents of today’s spellers, are typically well-educated professionals and driven to succeed. She is amused by bee watchers who suggest that a “spelling gene” might explain the domination by Indian Americans.

The success of Indian Americans has built on itself. A milestone is the 2002 documentary, “Spellbound,” that followed eight spellers on their path to the 1999 national bee and culminates with Nupur Lala’s exultant victory.

“A lot of the spellers I interviewed said that was the moment they realized, ‘We could do this,’ ” Shankar said. “So, if you count it down from when ‘Spellbound’ came out, it’s about a five- or six-year arc until they really started dominating. The reach of that movie has been much farther than people realized.”

In a country where sports are king for many young people, Buddiga said the bee offered competition that coincided with academic goals set by Indian American families.

“I mean, how many Indians do you see in college sports or professional sports?”asked Buddiga, 26, who is a successful professional poker player. “When the other kids are playing football or basketball, the Indians are doing spelling. I don’t think it has anything to do with Indians being innately better at spelling. It’s mostly just hard work.”

Another factor may be fueling that success: the creation of so-called “minor league” spelling bees run by and for Americans of South Asian descent. The two most prominent — the North South Foundation Spelling Bee and the South Asian Spelling Bee — have become proving grounds for a generation of Indian American children who have set their sights on the Scripps national title.

While most youngsters who make it to the national bee typically take part in just a few bees a year, Indian American kids are competing more often and against stiffer competition.

Rahul Walia founded the South Asian Spelling Bee eight years ago in New Jersey. In its first year, it held regional bees in eight cities that attracted 300 or so contestants. This year, the contest will host regional bees in 12 cities, including the Washington area, and more than 1,000 kids will take part.

Walia boasts that five recent winners of the Scripps bee have also taken part in — but never won — the South Asian bee. There’s no question, he says, that the tough competition helps prepare them for the bigger stage.

“Look at it this way,” he said. “If Venus Williams doesn’t do the French Open or Wimbledon and only does the U.S. Open, her game is going to be of a different caliber than if she is constantly participating in every open there is. In the same manner, we’re just another league, at par, with the national league.”

Participants in the minor-league bees are younger each succeeding year, said Vidya Chandrasekhar, whose daughter Sai is competing in her third and final national bee. Sai, 13, didn’t start spelling competitively until sixth grade.

“If you start early, oh, it definitely gives them a lot of extra help,” Vidya said. “Most of the kids that have won the national bee have started in second or third grade.”

Mirle Shivashankar, whose daughter, Kavya, won in 2009 and whose other daughter, Vanya, is making her fifth appearance in the national bee, is also a believer in the secondary circuit and has worked closely with the nonprofit North South Foundation’s spelling contest.

“Absolutely, there are a lot of these other bees that prep them up to this [national] one,” Shivashankar said.

The streak doesn’t seem to be going away anytime soon. Three of this year’s contestants — Shivashankar, a 13-year-old from Kansas, and Jairam Hathwar, 12, and Srinath Mahankali, 11, both from New York — have siblings who have won the bee in previous years.

And while the ugly outbursts on Twitter after last year’s tournament are hard to ignore, it’s rare to hear any complaints about the streak from non-Indian American contestants or their families.

The spelling-bee mantra is that you compete against the dictionary, not anyone else. You either know the word you’re given or you don’t. The dictionary is an unyielding opponent.

Kimble, the national bee’s director, understands the interest in why Indian Americans have done so well. But she hopes for a more enlightened response in the future.

“We look forward to the day when these children are called American first,” Kimble said. “And we think they do, too.”