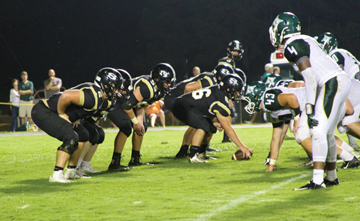 AMERICUS – The dedicated Harvey Simpson Stadium crowd provided much anticipation and excitement for the Southland Academy Raiders’ Friday night season opener. While the stands were packed with countless loyal fans, the Raiders were stifled by the tough Westfield Hornets, losing to the defending GISA Class AAA champions 47-14.
Westfield’s exceptional defensive pressure led to turnover problems for the Raiders who struggled to put up points right from the start. The home team’s run game was constantly suppressed by the talented Hornets, who wreaked havoc by forcing several key fumbles including one that was returned for a touchdown.
Ultimately, their collective pressure propelled them to a 27-0 lead at halftime, a deficit the Raiders were never able to overcome. Senior Hornets Cornerback Reagan Waller contributed to the visiting team’s impressive defensive work with two first-half interceptions.
Penalties also hurt the Raiders, especially during a couple of key drives. Along with the fumbles, these costly mistakes kept the Raiders from ever gaining any momentum during the course of the game.
The second half did provide some bright spots for coach Rod Murray’s squad though.
Sophomore Jamal Rice had an exceptional game while playing three different positions.  On offense, Rice propelled Southland to their only two touchdowns including running for a thirty-yard score and hauling down a beautiful thirty-yard passing touchdown from sophomore quarterback Alex Roach.
Rice went on to contribute a dynamic play for Southland’s defense by picking off a pass from senior Westfield QB Ryan Fitzpatrick.
Rice’s excellent game did not stop there as he also made an exciting punt return for sixty-five yards. Other key stats for the Raiders included junior Stephen Turton rushing for a hard-nosed (and well-earned) forty-five yards on twelve carries, freshman Patrick Weldon contributing sixty-five yards on seven carries, and senior receiver Taylor Weldon catching three passes for thirty-one yards.
Alex Roach performed admirably considering his tough opposition and finished the contest with eighty-eight yards on eight completions including that sensational thirty-yard toss to Rice.
All in all, this (very) young Raiders team competed and showed some true grit against a really talented Westfield squad. Expect this team to continue the good effort and resiliency they displayed in the second half as they go on the road to face the Robert Toombs Christian Crusaders on August 29 at seven-thirty.

ASHS drops season opener in Battle of the Panthers