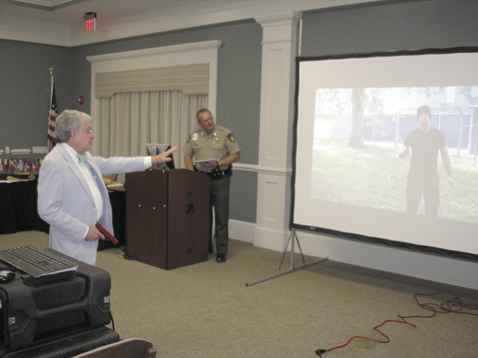 Kiwanis Program Chairman Jody Wade, above, takes part in an interactive police officer training program under the direction of Crisp County Sheriff’s Deputy Sgt. Michael Frazier at a recent Kiwanis meeting. The program allows the training officer (Frazier) to manipulate the outcomes of an officer (Wade) interacting with and responding to different cues from the subject in the video. In this simulation, unfortunately Wade failed to react in time and was ‘stabbed’ by the suspect. The program was brought to the Americus Kiwanis Club by Sumter County Sheriff Pete Smith, shown in photo at left with Frazier. Smith told the Kiwanians that crime is in every community, and read off an astonishing list of cases that came before a  Sumter County Grand Jury during a recent session.